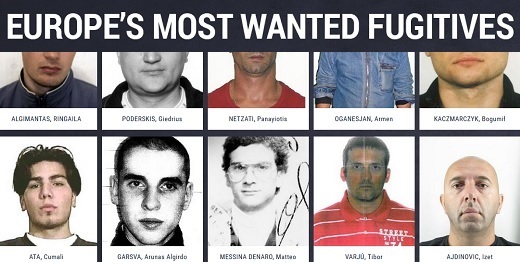 Ten of the men listed on the website ‘Europe’s Most Wanted Fugitives’ have been arrested and placed behind bars, Europol reports. In at least six of these arrests, the leads provided via the website played a direct role in locating the fugitive criminals.

The ‘Europe’s Most Wanted Fugitives’ website shares information on high-profile internationally-wanted criminals, convicted of - or suspected of having committed - serious crimes or terrorist acts in Europe. It is the first initiative on a pan-European scale to present a most wanted list on a common platform. Citizens in the European Union and beyond can provide useful information via the website, anonymously if preferred. Europol has supported ENFAST with this project by developing a secure platform for the ‘Europe’s Most Wanted Fugitives’ website.

Six of ten arrests were made in a different country than the one where they were initially searched. “The early success of 'Europe's Most Wanted Fugitives' initiative is another great example of law enforcement cooperation in Europe to keep our citizens safe. Europol's unique coordination and data-sharing platform, which connects 670 national and regional agencies, has played a critical role in helping our partners locate and arrest some of the most dangerous criminals in Europe. I am also grateful for the huge public support that has made this possible”, says Rob Wainwright, director of Europol.

For more on Europe's Most Wanted Fugitives check out our earlier piece about the launch of the website and the fugitives who made the list.