106 bikers charged in deadly shootout, loyal to club or law? A grand jury in McLennan County has indicted 106 bikers over the shootout in May that left nine people dead and eighteen people wounded at a Twin Peaks restaurant in Waco, Texas. Each defendant is charged with engaging in organized criminal activity. The 71 other bikers arrested that day will face the same charges when the grand jury returns. 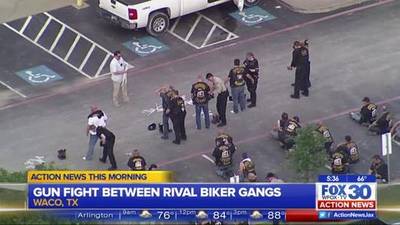 The shootout in Waco, Texas, is still shrouded in mystery as it is unclear which bikers were shot by rivals and which by police officers already at the scene to prevent any violence. What is known is that there was an altercation between members of the Bandidos and the Cossacks outlaw motorcycle clubs and that things got out of hand very quickly.

In an in-depth article in GQ, journalist Nathaniel Penn reconstructed that day from beginning to end. Having talked to several members of both biker clubs he paints a violent picture of short tempers and mass confusion.

One Cossack is quoted saying, “A group of seven Bandidos rolled up on bikes, furious that we were parking up front. They hit one of our prospects, an older guy—ran over his foot.”

Even though much of the violence began with the bikers, they are quick to pin the blame on the police. As Penn writes in GQ, “The bikers believe […]: The cops know their response was overzealous, possibly unlawful, and now they're covering it up. Some bikers believe there's an even more sinister explanation: that a firefight of some kind was supposed to happen—that it was all part of a plan by the Waco P.D. to provoke bitter rivals into a public brawl that could be violently crushed and then used as a basis for sweeping RICO indictments.”

Security cameras caught glimpses of the mayhem, with bikers firing shots inside the restaurant, while others crawl by underneath tables. See video below.

Though this indictment offers no new facts, it does offer us insight into the tactics prosecutors will use during trial. Namely that despite not knowing exactly who fired which deadly shot, they will treat each defendant as one and the same. Either you are with the club, a bonafide One Percenter, or you are with the United States of America.

The club colors offer each member protection and a fearsome reputation. Now, prosecutors seem to say, it is time they own that. Either you accept the actions committed by your fellow brothers and are willing to go down for the club or you come clean and testify.

You can’t have it both ways.

Most of the bikers do not seem impressed. A member of the Cossacks biker club told newspaper The Guardian that the indictment “doesn’t mean much” and that he has “full confidence” neither he nor his son would be convicted and that he would refuse a plea bargain if offered one.

Some will plea bargain to petty zhit and many will have the charges dropped. Many will also beat there charges except once on tape holding a gun and can be identified.

Canadian organized crime has it's roots.