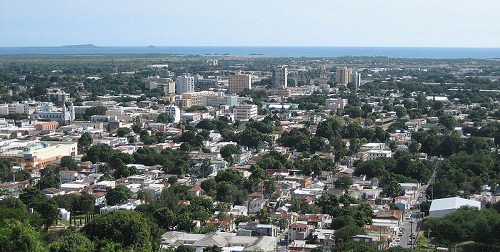 Federal authorities arrested 34 members of a drug trafficking organization which operated in the Santiago Iglesias Public Housing Project, in the municipality of Ponce, in Puerto Rico, Tuesday. They are charged with a variety of drug crimes and, if convicted, face a minimum sentence of 10 years, and up to life in prison.

The FBI and the Police of Puerto Rico Ponce Strike Force are in charge of the investigation, which, on March 3, 2016, culminated in a six-count indictment against 40 defendants charged with conspiracy to possess with intent to distribute controlled substances, aiding and abetting in the possession /distribution of heroin, cocaine base, cocaine and marijuana, and conspiracy to possess firearm in furtherance of a drug trafficking crime.

The indictment charges 40 individuals for their participation in a conspiracy to knowingly and intentionally possess with intent to distribute cocaine base (crack), heroin, cocaine and marihuana all within 1,000 feet of the real property comprising the Santiago Iglesias Public Housing Project, a housing facility owned by a public housing authority, and other areas nearby and within the Municipality of Ponce, Puerto Rico.

During the span of the conspiracy, in order to be able to operate a drug point at Santiago Iglesias Public Housing Project, “rent” would be paid to the leaders of the drug trafficking organization and their family members. As part of the manner and means of the conspiracy, control of the drug points at Santiago Iglesias was obtained and maintained by the use of force, violence, and intimidation. The drug points operated twenty-four (24) hours a day, in 2 shifts per day.

“Today’s arrests demonstrate our commitment to dismantle drug trafficking organizations whose members are affecting the quality of life of the law abiding citizens in our public housing projects,” said Rosa Emilia Rodríguez-Vélez, U.S. Attorney for the District of Puerto Rico. “Federal and state law enforcement agencies will continue their hard work to maintain the peace in our neighborhoods.”

“This case involved the long-term victimization of entire communities, who were forced to live in fear due to the nearly incomprehensible level of violence and narcotics trafficking taking place around them.  Sadly, housing projects that were designed to provide affordable living have instead become a breeding ground for violent gangs and criminal enterprises.  The hearts of everyone in the FBI go out to those families who were denied their basic rights to a safe environment in which to raise children, enjoy retirement, or even to walk safely through the streets of their neighborhoods.  As demonstrated today, the law enforcement community will continue to make a priority of targeting for federal investigation those individuals who join together to pray on the innocent,” said Douglas A. Leff, Special Agent in Charge, Federal Bureau of Investigation.