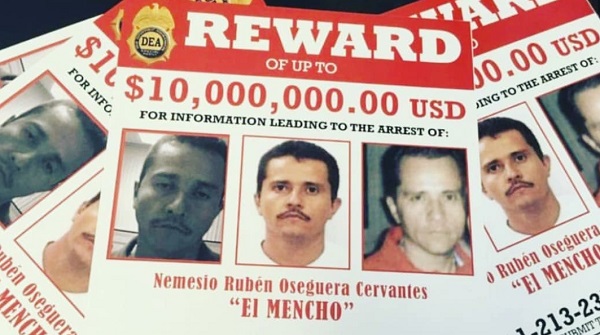 The objective of the Justice Department and the DEA is to put the Cartel Jalisco Nueva Generación in a chokehold. It explains the name of their major six-month investigation targeting the powerful Mexican drug cartel: Operation Python.

The DEA-led interagency operation encompassed all global investigations and related activities targeting the Cartel de Jalisco Nueva Generación (CJNG). It culminated in large scale arrests throughout the country within the past week, and has resulted in more than 600 arrests, 350 indictments, as well as significant seizures of money and drugs.

“Project Python is the single largest strike by U.S. authorities against CJNG, and this is just the beginning,” said Acting Administrator Uttam Dhillon. “This strategic and coordinated project exemplifies DEA’s mission: to disrupt, dismantle, and destroy drug trafficking organizations around the world and bring their leaders to justice. Today, DEA has disrupted CJNG’s operations, and there is more to come as DEA continues its relentless attack on this remorseless criminal organization.”

The Justice Department designated CNJG as one of the top transnational criminal groups targeted as part of carrying out this executive order, and DEA instituted Project Python to support this ongoing effort. CJNG is one of the fastest growing transnational criminal organizations in Mexico, and among the most prolific methamphetamine producers in the world. It is responsible for a significant proportion of drugs entering the United States, and elevated levels of violence in Mexico.

The efforts highlighted in the more than 600 arrests nationwide are illustrative of the significant reach the CJNG has in manufacturing, importing, and distributing a wide array of illegal narcotics within the United States. The proceeds from the local distribution of these narcotics are repatriated back to Mexico and further fuel transnational organized criminal organizations such as the CJNG.

Targeting “El Jefe” and his children

Federal law enforcement has taken a number of steps to degrade CJNG’s ability to operate in the United States. Today, the Justice Department and DEA announced a superseding indictment on charges of alleged continuing criminal enterprise against Nemesio Ruben Oseguera Cervantes, also known as “El Mencho,” the undisputed leader of CJNG.

Last month, El Mencho’s son, Ruben Oseguera Gonzalez, also known as “Menchito,” and second in command of CJNG, was extradited from Mexico to the United States on charges of alleged drug trafficking and firearm use in relation to drug trafficking activities. On February 26, 2020, El Mencho’s daughter, Jessica Johanna Oseguera Gonzalez, was arrested in the United States on financial charges related to her alleged criminal violation of the Foreign Narcotics Kingpin Designation Act.

Additionally, DEA has worked with its interagency partners to apply further pressure to CJNG. The U.S. Department of Treasury has designated El Mencho as a “specially designated narcotics trafficker” pursuant to the Foreign Narcotics Kingpin Designation Act, and the U.S. Department of State has issued one of the largest narcotics rewards ever – $10 million – for information leading to the arrest of El Mencho.