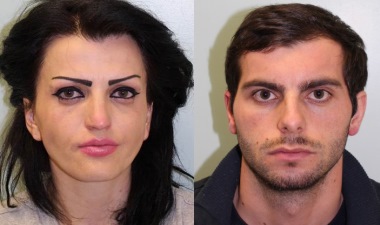 Albanian drug traffickers Artan Markaj (23) and Marsela Kreka (30) were sentenced to 6 years 9 months and 8 years respectively on Monday. They were jailed as the result of a National Crime Agency investigation in which 5.5 kilogram of high-purity cocaine was taken off the streets.

Officers caught the duo after a drugs handover in Barnet, north London, last June. Markaj left his home in Clarence Close, Barnet, to get into a Mini Cooper driven by Kreka. Police believed he was carrying drugs under his coat and stopped him and Kreka when he got out of the car a few streets away.

A 1 kilogram block of high purity cocaine wrapped in a sock was hidden under the passenger seat.

When officers searched Markaj’s home they found a further 4.5 kilogram of high-purity cocaine, £11,700 in cash within a concealment under a bedroom window sill, and drugs supply paraphernalia. The drugs would have been worth an estimated £660,000 when cut and sold on the streets.

Markaj admitted at the scene that the Greek ID in his possession was a forgery and that he was an Albanian national. He pleaded guilty to conspiracy to drugs trafficking, possessing a false identification document and money laundering.

Kreka was found in possession of a Romanian driving license in the name of Maria Danciu which she claimed was her true identity. Enquiries confirmed it was a forgery. She denied drugs trafficking and possessing a false identification document but was convicted by a jury.