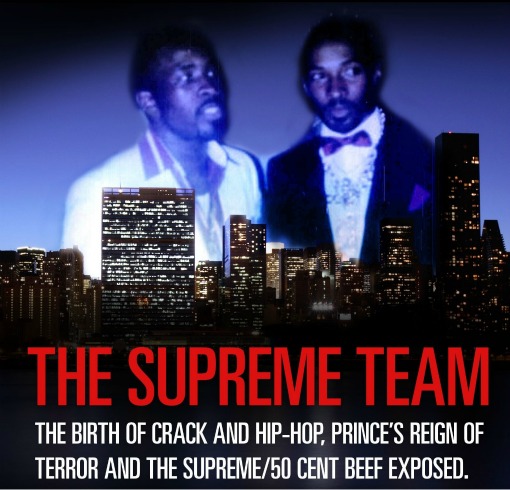 Just like Hollywood catapulted the Italian Mafia into the mainstream with the Godfather movies, New Jack City documented the devastating crack epidemic and the drug crews that terrorized and held court in the city’s projects. Nino Brown was a fictional character, as was his crew, but you didn’t have to look far to find their real life counterparts who dominated the headlines of New York City’s tabloid newspapers.

Characters and cliques that seemed to evolve straight out of the pages of a Donald Goines novel rose to prominence, becoming larger than life figures and ghetto stars in their respective hoods. Just like Tony Montana in Scarface these urban gangsters were getting theirs. America loves its bad guys and popular culture has been fascinated with outlaw heroes since the Wild, Wild West. The mythical legends of Billy the Kid, Jesse James and Butch Cassidy still resonate today. Tinsel Town has immortalized them in film just as they have made icons of the Italian mobsters and Colombian cartel cocaine cowboys. And now with movies like American Gangster with Denzel Washington the black gangster is coming in vogue. The Supreme Team, straight out of the Southside of Queens, has become a crew of note.

Street tales, real life crimes, newspaper headlines, Hollywood sensationalism, and rapper’s rhymes have perpetrated, promoted, and created a legend of mythical proportions that has grown exponentially over the last 20 years, keeping the Supreme Team, the most infamous crew out of the Southside of Jamaica Queens, ringing bells from coast to coast. As one of the most notorious crews from a deadly era, the team towers above its contemporaries in stature, notoriety, and infamy. But it’s not all convoluted hype. Infamy has its price. Besides Hollywood paying court to the black gangster, many rappers who were shorties in the 1980s, otherwise known as the crack era, the time of the Supreme Team’s reign and dominance, have name checked the team’s exploits in verse. The chosen son Nas first broadcast them to the world on 1994s Memory Lane and Queens native 50 Cent shouted them out on 2000s Ghetto Qur’an, Ja Rule and others have also celebrated the Supreme Team in their songs creating an everlasting tribute in their rhymes.

With black gangsters newfound relevance in our pop culture due to rappers putting them on pedestals and mythologizing their crime exploits in verse, a new kind of anti-hero from the inner-city is taking its place in the pantheon of outlaw heroes next to figures like John Gotti, Pablo Escobar, Billy the Kid and John Dillinger in American folklore. With magazines like Don Diva, F.E.D.S., Street Elements, 4front and AS IS, Ethan Brown’s Queens Reigns Supreme and BET’s American Gangster series whetting the public’s appetite for the street legends long idolized by rappers, a movement is afoot.

Hip-hop has embraced the street legends from the inner-city and now Hollywood is taking notice with several black gangster movies in production now. The Supreme Team, The Boobie Boys, Sex Money Murder, The Shower Posse, Freeway Ricky Ross, White Boy Rick, Frank Matthews and Wayne Perry- these are the new wave of American gangsters being mythologized in raps lyrical lore and whose stories will soon grace the silver screen.

The Street Legends series from Gorilla Convict Publications is part of this growing movement. They are at the forefront. With Street Legends Vol. 1 they brought readers the Death Before Dishonor Six- Supreme, Wayne Perry, Anthony Jones, Aaron Jones, Pistol Pete and Boy George. In Street Legends Vol. 2 they brought readers more of that real gangsta flavor with stories on Original Gangsters Frank Matthews, Peanut King, Michael Fray, The Boobie Boys, Short North Posse and New World. And now in Volume 3 of Street Legends they bring readers- The Supreme Team: The Birth of Crack and Hip-Hop, Prince’s Reign of....

Read the Supreme Team’s story and witness their rise from Baisley Projects on the Southside of Jamaica Queens. From street corner hustlers to drug barons living the fast life, their ruthless ways precipitated their downfall. But in Prince’s demise, Supreme rose from the ashes and became a player in the hip-hop culture he spawned. Holding court as rap royalty, a music industry mogul who hobnobbed with superstars.

Supreme’s resurgent rise with Murder Inc., and his conflicts with 50 Cent are revisited as are all the hoopla and controversy surrounding their beef. This book chronicles the complete story of the Supreme Team from its inception to its fall to its rise again. This legendary crew was very instrumental in the birth of hip-hop and they ushered in the crack era in New York City with devastating brutality. Their influence on hip-hop has lasted 25 years and is still going strong. This book is their story, in their words and the words of others who were there. It’s brought to you straight out of the penitentiary by Gorilla Convict Publications.

Seth Ferranti has been called “the most potent voice of the streets” and writes for www.gorillaconvict.com, the premier publisher of hard-edge and brutally real true crime stories. Check out his newest book- The Supreme Team: The Birth of Crack and Hip-Hop, Prince’s Reign of..., available from Gorilla Convict Publications and www.gorillaconvict.com for $19.95.