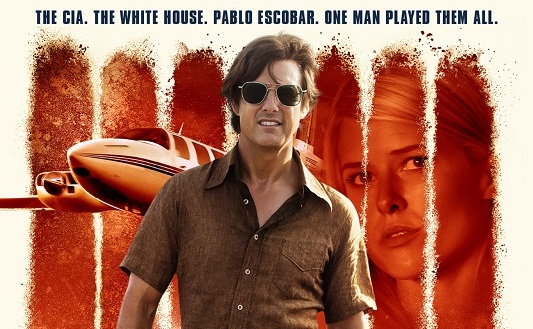 Call it Top Gun on cocaine! In American Made actor Tom Cruise plays pilot Barry Seal, a man who is offered a job smuggling drugs for the Medellin drug cartel led by Pablo Escobar and starts working as an informant for the CIA and DEA. Not the safest job in the world, but definitely one fit for Hollywood’s silver screen.

The true story of Barry Seal has been well-documented in countless books and documentaries. Born in Baton Rouge, Louisiana, Seal started out as a commercial airline pilot, but quickly gets caught up in the lucrative world of flying loads of cocaine across the border. With each flight, he could make as much as half a million dollars.

But that kind of money attracts heat and it wasn’t long before the DEA came knocking on Seal’s door and convinced him to work for them as an informant. His information was needed to bring down Pablo Escobar and his Medellin Cartel. A dangerous situation, but Seal dived in and did the best he could.

Unfortunately for him, Escobar had his sources too. Seal was shot to death in Baton Rouge on February 19, 1986, by Colombian sicarios.

How his story will be told in American Made is still, pardon the pun, up in the air, as it will not be in theaters until August 17. To get a taste of this explosive, adrenaline-pumping tale, check out the trailer below:

Tom Cruise will be accompanied in American Made by Sarah Wright, who plays his wife; and Jesse Plemons, known for his roles in Black Mass, Breaking Bad, and Fargo.