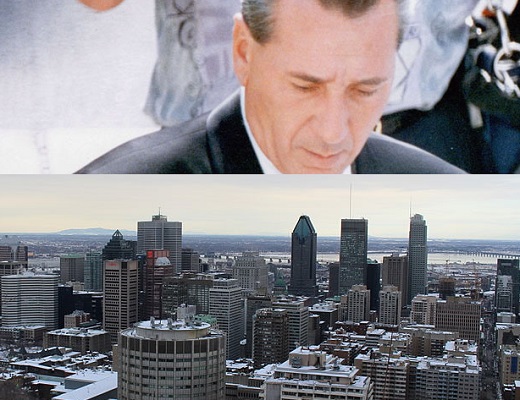 The Montréal underworld continues its restless days and nights in the absence of deceased “boss of bosses” Vito Rizzuto. Without a strong man controlling all the various Mafia crews and gangs the city has erupted in anarchy with each group vying for control. This week, several mobbed up businesses were set ablaze by arsonists. The fires send a simple message: “Give up. Surrender.”

It’s been a hot week in the city of - and area surrounding - Montréal. In the past seven days, four businesses were destroyed by arson attacks. The latest blaze occurred on Thursday night when arsonists set fire to John & Dino, a food-distribution company with ties to the Rizzuto crime family. It was once owned by high-ranking mobster Agostino Cuntrera until he was shot down here, in front of his own company in 2010.

Cuntrera’s murder was part of a rebellion against the regime of Montréal Mafia boss Vito Rizzuto, who was then serving a prison sentence in the United States for the infamous murder of three Bonanno crime family captains in New York. Upon his return from the United States, Rizzuto smashed the rebels within his group and reestablished himself as supreme leader. His death of natural causes in 2013 meant unrest and chaos were around the corner yet again as his enemies preyed on his criminal legacy.

According to reporter Daniel Renaud of La Presse newspaper, an individual or individuals arrived at John & Dino shortly before midnight and smashed the windows. They then threw an incendiary device inside and fled the scene. Due to the excessive smoke, the business’ sprinkler system was activated and extinguished the fire before it could cause any serious damage.

Read The Canadian Connection: Flooding the U.S. with dope

The other businesses that were hit this past week also had close ties to or were owned by members of the Rizzuto family. Therefore, it seems that the Rizzuto family’s dominance over the Montreal underworld is being challenged yet again, as happened six years ago when multiple Rizzuto businesses were firebombed.

In an interview with CBC in 2010, arson squad Commander Mario Lamothe said the frequency of the arsons suggested that organized criminals were trying to muscle in on new territory. “Yes, it's somebody who is asking low-level criminals to set fires, to send a message,” he told CBC. “But which message and why? That's where we're having problems.”

For Pierre de Champlain, a former RCMP intelligence analyst and author of several books about the Montréal Mafia, the message was clear then and is clear now. “It wasn’t meant to hurt or hinder their business,” he tells Gangsters Inc. “It is simply a message to the Sicilian faction, which could read like this: ‘Give up. Surrender’,” he says.

“There are very interesting things going on in Montréal,” he continues. “The world of the Mafia is full of secrecies, codes, coded messages, like the one that was found this week in Montreal. It is not, in my opinion, unusual to leave a message like at the door step of business or resto-bar. It has surely been done elsewhere in New York, Palermo, etc. Montréal is not an exception at all.”

As to who, exactly, is behind these attacks remains unknown, but De Champlain thinks it’s the Calabrian ‘Ndrangheta. “I am in the opinion that these arsonists are acting on orders of the Calabrian consortia,” he says. “These arsonists are henchmen, willing to do anything to please the Mafia and maybe, in the hope to be recognized for their value.”

The stakes are high, according to a recent story by Daniel Renaud. Up for grabs is the Montreal Mafia’s multi-million dollar paris sports bookmaking operation, which is estimated to generate up to 26,8 million a year. The book is currently run by boss Stefano Sollecito, whose mob father Rocco was murdered in May by unknown hitmen. Sollecito was arrested in late 2015 together with Leonardo Rizzuto, the son of Vito, and charged with running a massive cocaine conspiracy involving the Mafia, Hells Angels, and street gangs.

But this isn’t just about a lucrative sports book, it’s about more than that. This is about power and control. It’s about answering the question who will become the new leader of the Montreal underworld. De Champlain: “It seems that the Sicilian faction led by Sollecito and Leonardo Rizzuto is coming to an end.”