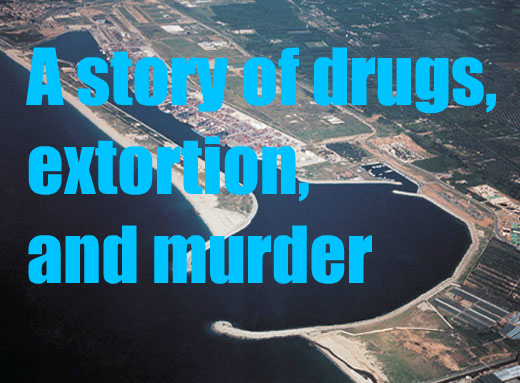 A history told from the inside

'Ndrangheta is a reality well known within Italian underworld but its extreme secrecy makes it almost impenetrable by police. Thanks to the wiretaps, today probably the best way in order to fight organized crime, we came to learn interesting facts and something about the links between the 'Ndrangheta and other criminal organizations.

"Milan is in hands of the ‘Ndrangheta"

These are the words of an international broker wiretapped by police in the anti-mafia operation "Marcos" which, in February 2011, showed a link between 'Ndrangheta members and Colombian cartels. The two groups were working together in order to import five tons of cocaine. The drug was to arrive in Milan city, through Warsaw, where the Polish policemen seized 1.130 kilos.

Marcello Sgroi (left) was talking with a Colombian dealer and he said: "In Italy everything is controlled by Calabrians and Sicilians, Milan city for example is in hands of the Calabrians... they are my friends and when you'll come here you would know them".

The millionaire drug trafficker was financed by crime families from Locride and Gioia Tauro areas, among them the top boss Antonino Paviglianiti (right). He is probably the boss who Sgroi talked about in the same conversation: "The Calabrians are very respected, I'm in friendship with them, we'll meet very important people... he is important, among the most important families in Calabria".

The police operation, starting in 2007, stopped one of the most important pipelines for importing cocaine from Colombia. In the same operation were also arrested Domenico and Antonio Vottari, who ran a gang of drug dealers linked with the 'Ndrangheta in Milan city.

Business and frictions with the narcos

The anti-mafia operation "Crimine 3" on July 2011 against the 'Ndrangheta cells in northern Italy, following the previous ones "Crimine 1" and "Crimine 2", showed other interesting stuff. The disappearance of half a ton of cocaine from Gioia Tauro port caused frictions between 'Ndrangheta clans, Albanian gangs and Colombian cartels.

The wiretaps showed the existence of a 'Ndrangheta family located in Erba, in the northern region of Lombardy, led by Pasquale Varca, who answered to the Arena family from Isola Capo Rizzuto in Calabria.

The Varcas bought the drug together with an Albanian gang located in Belgium, but the shipment was run by the Pesce family from Rosarno, which controls the Gioia Tauro port where the drug had to arrive before it was sent to Lombardy and northern Europe. Varca knew the Albanians because of a construction worker of Albanian origin who worked inside a building site controlled by him and who introduced the Belgian-Albanians to Varca's group.

Thanks to Varca’s connections with the Pesces who guaranteed the arrival of the shipment in Gioia Tauro, the business went on and the Albanians financed half of the shipment. According a previous agreement the Pesces had to keep 90 kilos because the drug passed through their territory, but instead they kept everything.

It made Pasquale Varca and the Albanians angry when they found out they had been defrauded by the Pesces. The Colombians asked explanations to Varca and the Albanians. Some members of the Albanian gangs went to Milan in order to meet Varca and talk about the problem. Varca, who guaranteed the success of the business, was wiretapped by police during the meeting and accused Michele Oppedisano, a member of the Pesce family who was living in northern Italy; according to Varca he planned the disappearance of the drug: "Michele is a motherfucker, he isn't shit, they betrayed me... but I went there, I called my relatives, my friends... do you understand? it's not good, it's not good".

In another conversation some days later, Varca, who lost a very important business, seemed even more angry and he talked like he was in a gangster movie: "I don't give a shit, I go to them and I blow them up like a kamikaze!".

Meanwhile, a member of the Varca group and a member of the Albanian gang nicknamed "Paolino", were planning a meeting with the Pesces, but when the Albanian confessed to Varca's man that he phoned Michele Oppedisano and he threatened him because of the money he lost Pasquale Varca advised them not to go in order to avoid problems. In fact according to police they could be killed by the Pesces if they would go to the meeting.

"Paolino" the Albanian was also wiretapped while he was talking with Varca and he talked about Oppedisano: "If he doesn't have the money I don't want to meet him... he is a bastard, if he comes I want to meet him in your house".

In another conversation Varca is talking with Aurelio Petrocca, a member of the Arena family, and he said that he prevented Michele Oppedisano from killing "Paolino the Albanian" and he guaranteed the other Albanians he would come back alive from Milan: "If he was a man he should kill me not him, he wanted to kill him and I asked why not me? I'm here, kill me".

This information doesn't come from wiretaps but from an informant.

Giovanni Di Muro (right) worked under Pepè Onorato, one of the most important 'Ndrangheta bosses in Milan city. He was also a mediator between 'Ndrangheta members and Cosa Nostra members in that city. He was approached by a secret service agent who asked him about Luigi Bonanno, a boss of Cosa Nostra in Milan who was released from prison recently after he was sentenced for drug trafficking and mafia association and Di Muro started cooperating privately with him. At that time, Bonanno was planning the import of two tons of cocaine from Colombia, through Panama, together with Ugo Martello, another Sicilian boss transplanted in northern Italy.

In 2006, two members of the family led by Onorato, Michele Mastropasqua and Antonio Di Chio, began extorting an important local businessman; but they started it without any permission from their boss. Di Muro informed Onorato about the plan of the two "rebels", who afraid of disciplinary action, asked Luigi Bonanno and Ugo Martello to help them. These were important members of Cosa Nostra and according to Di Muro among the top bosses in the whole Milan city.

The Sicilian bosses plan to replace the two mobsters in the business all the while keeping all the money that was made from the extortion. According to Di Muro it could be the beginning of a war, when Pepè Onorato heard about it he wanted to kill Bonanno.

They organized a meeting and they asked Guglielmo Fidanzati, son of Gaetano, to lead it. The Fidanzatis are an authority in Milan city and they decided that the extortion had to go to the Calabrians, since they first started the business and he invited Bonanno to pay them.

Di Muro, who took part personally in a second meeting, explained that the Calabrians and the Sicilians met in a bar called Ebony, home of several local mobsters; Bonanno said to follow him in his building site where there were fifteen of his armed men. He gave the money and told Di Muro: "Go away now, I don't want to see you or any Calabrians here anymore, if you don't want to be killed".