Oh how fast things can change. Just one month ago law enforcement and media in The Netherlands were warning the public of an impending war between the Hells Angels and a rival motorcycle club named Satudarah.

Today, both clubs together with other Dutch outlaw motorcycle clubs took part in a huge show of protest against their government, which had prohibited several biker days for fear of violence. All clubs involved wanted to show that there is no animosity between any clubs and thus no need for cancelling all those biker and Harley days across the country.

Of course their get together in Amsterdam was also to tell the government that even if they prohibited each and every biker day in the country, the clubs would still organize illegal get-togethers whenever they felt like it. 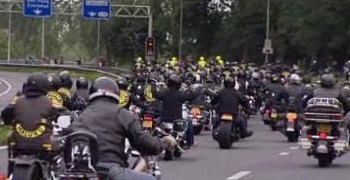 The big biker day passed by without any violent clashes. However, Dutch police did block off a highway leading into Amsterdam when between 150 to 200 members of Satudarah MC were on their way to attend the party atmosphere in Amsterdam (photo right). Satudarah leaders and police eventually agreed that twenty members of the motorcycle club would be allowed to attend. Why twenty? Because there were also about twenty members of the Hells Angels at Waterlooplein, their final destination in the centre of Amsterdam, and the cops probably figured the even number would help keep things quiet.

The RCMP in Canada, meanwhile, has claimed that even if the bikers would want to fight, they simply couldn’t because they are too old. “RCMP investigators say they're finding that more criminal biker gangs are using so-called puppet gangs to do their illegal dirty work”, News1130 reports.

Supt. Pat Fogarty, head of the organized crime branch of the BC's Combined Forces Special Enforcement Unit, was interviewed by News1130 and explained that the, usually, older bikers who are involved in crime get younger guys that are part of a puppet gang to do their dirty work. “Fogarty says the criminal biker gangs ‘don't have the testosterone or the desire to muscle their way around these young guys.’ He says a 55-year-old member of the Hells Angels isn't going to peddle dope, and instead makes the younger men from the sanctioned club do the work.”

When it comes to outlaw motorcycle clubs it seems everyone has a theory, fear, or beef and one needs to wait a long time before the veil of secrecy and propaganda is lifted so it becomes clear which side is telling the truth.