“Victoria Police said it "witnessed several riders breaking road rules" but did not take action because they did not have enough officers”, the Herald Sun newspaper reported on Sunday. A police spokesman told the newspaper that its resources were depleted when 100 officers were dispatched to Christchurch, New Zealand to provide help there following the earthquake.

"Police witnessed several riders breaking road rules but the priority at the time was to provide a safe environment for other road users. Police are currently reviewing all incidences regarding breaches of road traffic laws to determine whether further action should be taken", the spokesperson added.

In Sydney, Australia meanwhile, the Hells Angels and Bandidos are said to go to war. The Pretty In Ink Tattoo Studio in West Ryde, Sydney was the scene of a brutal shooting this past Saturday when two masked men stormed in and shot another man in the shoulder. The 40-year-old victim later died from his wounds. The tattoo studio is allegedly linked to the Hells Angels and police fear this shooting could be a new sign of an all out gang war after an earlier attack on another Hells Angels-linked parlor, Tattoo World at Baulkham Hills, early on Friday.

The Daily Telegraph reports that: “Tensions between the gangs exploded last month when 55 Bandidos, including the whole Parramatta chapter, defected to the Hells Angels, making them the state's third largest club.” 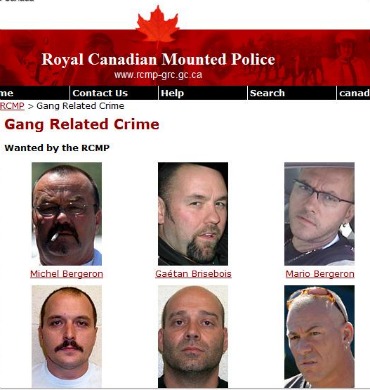 In Denmark, sixteen members and associates of the Hells Angels went to trial on charges of attempted murder, assault and weapons possession. “The charges against them include six attempted murders taking place between April and October 2009 during an open conflict between the Hells Angels and immigrant gangs”, the Copenhagen Post reported yesterday.

A former Hells Angel is set to testify against his former brothers and give evidence against the man who ordered the attempted murders. The trial is set to continue through September.

The RCMP in Canada is still looking for a bunch of Hells Angels that managed to escape arrest after the big bust named Project Sharqc in 2009. Nineteen men are still on the lam and their faces are posted on the RCMP site. The Toronto Sun added that: “Interpol has files on the 17 Hells members and two associates who are still at large. The fugitives have also been flagged with a “red notice” designation that would allow foreign police forces to arrest and detain them pending extradition to Canada.”