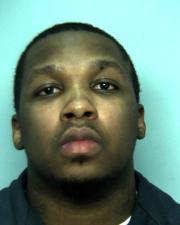 Desmond Finnell, a lieutenant in the Black P-Stones gang in Newport News, Virginia, was sentenced to 30 years in prison for racketeering conspiracy and murder on Thursday. 30-year-old Finnell had already pleaded guilty in November of 2016.

For several years, Finnell was one of several violent members of the Black P-Stones crew led by Michael Hopson. The gang was into drug dealing, robberies, and various other violent schemes. Finnell was responsible for multiple shootings in Newport News and Hampton as part of his Black P-Stones gang activity.

As is customary in organized crime, things are never personal, just business. This was also the case for Finnell.

When he had a falling out with a friend about a missing batch of marijuana, Finnell decided there was no use in sitting down and having a drink and talk with his pal. Believing his friend, Ernest “Critter” Crudup, had robbed him of around 20 pounds of marijuana, on November 28, 2010, he lured him to a location in Newport News where he shot him to death.

Whoever said drug business was easy money, needs to check the numbers. While the price of bricks remains high and stable, the price of life is going down faster than the Titanic.