The Bonanno Crime Family has been hit once again. This morning, federal agents of the FBI and DEA arrested several high ranking mobsters on charges of racketeering, extortion, illegal gambling, and conspiring to distribute marijuana. One of those arrested is an alleged associate of the Gambino Crime Family and is charged with loansharking. If convicted, each defendant faces a maximum sentence of 20 years imprisonment.

Among those picked up this morning was Vincent Badalamenti (53), the reputed acting boss of the Bonannos, who was placed in handcuffs at his luxurious Staten Island home. According to prosecutors, Badalamenti was the highest ranking Bonanno member still on the streets.

“The indictment is the result of a multi-year joint investigation by the DEA and FBI that utilized a variety of techniques to gather evidence, such as consensual recordings of the defendants discussing their charged crimes, cooperating witnesses who were formerly members and associates of organized crime, and surveillance. The evidence revealed a pattern of violence and intimidation employed by the defendants to further the mob family’s economic interests, including Badalamenti allegedly directing the hostile takeover of a bar located on Coney Island Avenue in Brooklyn, as a result of its owner’s failure to repay a debt owed to Badalamenti”, reads the official press release by the FBI. 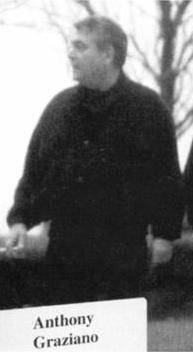 Graziano’s (right) name should add a lot of media and public attention to this pretty straight forward mob case as his daughters Renee and Jenn are enjoying time in the spotlight creating and appearing in the hit television show Mob Wives. Though many members of online discussion boards like The Real Deal jokingly claim Anthony Graziano is getting a nice chunk of money as tribute payment from his daughters for making money off of his reputation. The reality seems to be that the show only gives “TG” more headaches and a bulls eye on his back. Seeing all the reports in the media it is clear that this case will not fly under the radar but instead will be followed closely by both the New York tabloids as well as gossip shows and websites. That kind of publicity is something the secretive mafia is not too fond of.

Authorities, meanwhile, are adding this bust to a very long list of blows they dealt to the Bonanno Family. “The charges and arrests announced today are the latest in an ongoing investigation that has resulted in the prosecution of more than 175 members and associates of the Bonanno family in the Eastern District of New York. Since March 2002, more than 10 Bonanno family bosses, acting bosses and administration members have been convicted in this district on racketeering and racketeering-related charges.”

“Members of organized crime continue to exploit their victims the old-fashioned way—through violence, threats, and intimidation. Learning nothing from their incarceration, two of the defendants allegedly sought to regain their money and influence on the street while still under federal supervision. But because they learned nothing, they find themselves back in custody again, along with their co-defendants,” stated United States Attorney Lynch. “We will not rest in this pursuit until the Bonanno crime family and La Cosa Nostra have been completely dismantled.”

FBI Assistant Director in Charge Fedarcyk stated, “Today’s charges confirm that La Cosa Nostra families continue to engage in the bedrock money-making activities like extortion and loansharking, and are not shy about resorting to violence as a method. As long as mobsters continue their predatory ways, the FBI will continue to target the mob.”