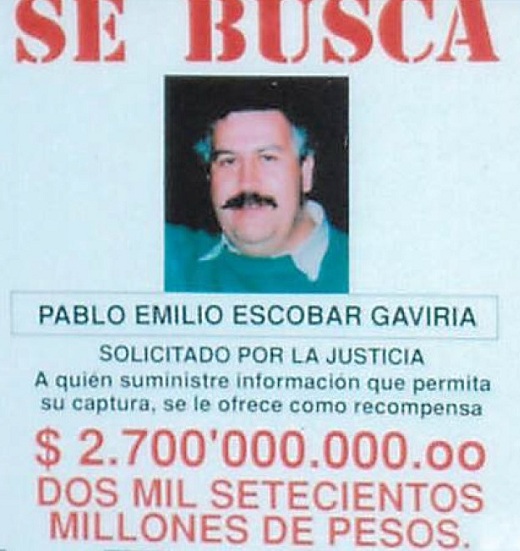 Pablo Escobar is the world's notorious drug lord. Once glorified as Robin Hood by many who loved him and vilified by the law as a mass murderer and drug dealer, Escobar defined an era like no other gangster on the planet. He ran the cocaine trade in Bogota Colombia like a "Fortune 500" company, bringing in "millions of dollars" annually.

A feared man by the Colombian and U.S. government, Escobar once supplied the majority of the cocaine shipped into America, and he masterminded a campaign of kidnappings and bombings in Colombia's capital and throughout the country.

During the 1980s and 1990s, Escobar and his cartel turned Medellin into a catalyst for violence; the most conservative estimate indicate that Escobar is responsible for thousands of deaths.

"He was one of the wealthiest men in the world but he was a vicious terrorist and murderer," retired DEA Joe Toft, told this writer in an email.

Despite being a mass murderer and drug trafficker this kingpin possessed a seductive and generous spirit. "Escobar was an incredibly fascinating persona," Toft recalls.

Nearly 19 years have passed since Pablo Escobar was gunned down on a rooftop in the city of Medellin on December 2 1993. Just like a classic Shakespearean story that never dies---Colombia is once again buzzing about the king narco-killer. Millions of Colombians, since May 28th, has tuned in nightly on the Caracol network to watch... "Escobar: Boss of Evil."

Caracol, Colombia's largest television network, is currently showing the "Boss of Evil" as a 63-episode drama series about the life and founder of the Medellin drug cartel. "This is an important program for the new generations who do not really know much about Escobar," producer Juana Uribe recently stated. But critics say the drama series has raised fears that a new and younger generation of people may be inspired to follow in Escobar's footsteps, idolizing his drug dealing and murderous ways. 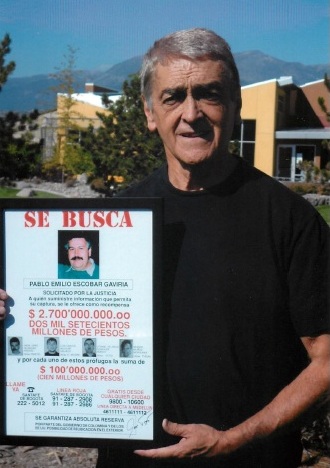 Joe Toft (photo right), a retired DEA (Drug Enforcement Agent) who served as the Special-Agent-in charge of the DEA office in Colombia---who coordinated the "kill or capture mission" of Escobar, responds to the public's fascination with the deceased drug lord.

"Pablo Escobar became a role model for many young people in Colombia because of the money he had, his defiance of the government and his Robin Hood image."

But, Toft explains, "they should remember how Escobar died. He was hunted down like an animal."

During 19th century, coca and cocaine were controlled by Western commercial interests. But Escobar made cocaine a patriotic business in Colombia. Forbes Magazine, in 1989, profiled Escobar as one of the world's billionaires, worth over $3 billion. He loved to share his wealth. Escobar was a brilliant criminal, spending millions of dollars on parks, schools, stadiums, churches and even housing for the poorest of Medellin residents. In return, people loved him for his generosity. They saw him as a poor young man giving back to his community.

Masked behind the Robin Hood personality, Escobar executed urban terrorism upon government officials, politicians and law enforcement officers---anyone who crossed him or those in need of killing.

Some of Escobar's famous quotes are:(1) I prefer to be in a grave in Colombia than in a jail cell in the United States:(2) Everyone has a price, the important thing is to find out what it is:(3) Sometimes I am God, If I say a man dies, he dies that same day.

Escobar's legacy is so powerfully profound, his grave is a popular tourist attraction in Colombia. Thousands come there to pay their respect.

With over 1,300 people included in the "Boss of Evil", the series is filmed in more than 450 locations. What is interesting is the fact the series were produced by relatives of two of the most high profile victims killed by Escobar: Their names are: Luis Carlos Galvan, a presidential candidate who campaigned as a hard-driven moral crusader against Pablo's drug operation, and, Guillermo Cano, the publisher of the daily El Espectator newspaper. Producer Juana Uribe is the niece of Galan, and the second producer, Camilo Cano, is the son of Gano, the publisher.

The initial episode in the series---reportedly inspired by the 2001 book "The Parable of Pablo" attracted over 11 million viewers. Boss of Evil traces Escobar's life, from a timid young man growing up near the Northwest city of Medellin to the infamous drug lord who amassed unrivaled wealth and influence before his violent end at the hands of U.S. DEA agents, the Los Pepes and other military forces.

As the series play out in foreign markets the viewership steadily increase. Further, to capitalize on the notoriety, the U.S. based Spanish language television channel Telemundo will start airing the series across America in late July or August--proof of Escobar's infamous fame is still a multi-million dollars business both in life and death.

In a interview with Bogota reporters, Juana Uribe, said, "We all can remember a bomb set off by Escobar or experienced an attack either directly or indirectly. What is important is to see the entire picture, how one thing led to another in his life.”

Uribe further says the series filmed mostly in Bogota, Medellin and Miami Florida, cost approximately $170.000.00 per episode. "The series aims to show "Escobar from all sides" and to shed light on those who had the courage to confront him."

Sebastian Marroquin, the son of Escobar, who changed his name to cut ties with his father's legacy, told a prominent Spanish Internet portal, that the drama series about his father sends the wrong message to young people. "They are saying it is glamorous to be a drug dealer and that is a danger to new generations."

Producers say they are aiming for historical accuracy.

When Pablo Escobar was finally cornered on a rooftop and killed, DEA Joe Toft recently told this writer: "I spent nearly six years chasing after him, with many close calls and a lot of frustration. When Escobar was killed I was ecstatic because now I knew I could go back to the United States, feeling we achieved a major objective."

"However, Toft recalls, as I celebrated with the cops, shortly after Escobar's death--I had a knot in my stomach." When asked, why, Toft lamented. "Because I knew the Cali cartel played a major role in bringing down Escobar and the Medellin cartel. And in the process the Cali cartel had further corrupted the Colombian police and made significant inroads into the Colombian government. It was not only a victory for law enforcement, but a huge victory for the Cali cartel."

Referring to the "Boss of Evil" TV series based on Escobar's life, Media Studies Professor, Alberto Martinez, stated to France24 International News, "I don't think the stated objective is being met, kids are seeing much more of the Robin Hood than the criminal."

For the younger generation who fancy the wealth and power of Escobar's drug empire and motivated to follow in his footsteps, former DEA Joe Toft, provides a bit of fatherly advice. "They should remember thousands of innocent people Escobar killed with his bombs in the streets and other terrorist acts. And I would remind them of the misery and death that his drugs brought to the people that used them."

Toft philosophically sums up the controversy surrounding the TV show. "Life is about making choices between good and bad. Choosing Pablo Escobar as a role model is a horrible choice."

Journalist Clarence Walker can be reached at: cwalkerinvestigate@gmail.com - For more of his articles see his section at Gangsters Inc. which can be found here.