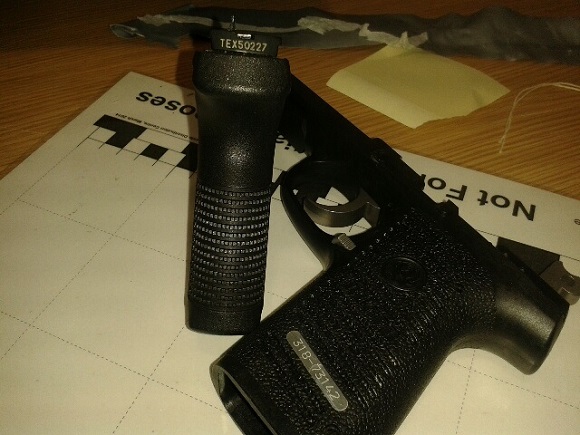 A convicted armed robber has been sent back to prison after being found guilty of importing two firearms and fifty rounds of 9mm ammunition from the United States. 45-year-old Jason Nicholas was sentenced to 12 years behind bars on June 23.

Police got on his trail in February 2015, after Border Force officers working at an international postal depot near Heathrow found two packages containing firearms parts, labelled as ‘antique metal’ which had been posted from Dallas to an address in Bayswater, London.

NCA officers visited the address, a block of flats, and found a further two parcels to the same consignee unopened in the communal hallway. All four packages were examined, and between them contained the constituent parts for two semi-automatic pistols and 50 rounds of 9mm compatible ammunition.

Fingerprint evidence on some of the parts linked them to Nicholas, one of six men jailed in 1995 for their part in a series of armed robberies in north and west London. He was sentenced to 20 years in prison, reduced to 13 years on appeal.

Checks also revealed Nicholas had been to Dallas for five days the week before the parcel was intercepted, and that one of the men convicted with him in 1995 lived in the flats in Bayswater.

Police raided Nicholas’ home in Mount Park Road, Pinner, in the early hours of 13 August 2015. He would later be charged with the importation of firearms. At first he denied the charge, but was found guilty following a five-day trial at the Old Bailey in June 2017.

“Given Jason Nicholas’ history of involvement in violent crime, seizing these guns and putting him behind bars has undoubtedly prevented further offences being committed,” Ian Truby, from NCA Border Investigations told the media.