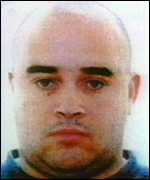 Curtis "Cocky" Warren was one of Britains biggest and richest drugtrafickers. Worth an estimated 185 million British pounds. Unlike most other drugtraffickers or criminals Warren is a highly intelligent force. Warren doesn't drink, smoke or use drugs. He's got a photographic memory for telephone numbers and numbers of bank accounts. His organization had contacts with the Colombian Cali Cartel, Maroccan and Turkish criminal organizations. Curtis Warren was the main drug supplier in all of Britain moving tons of cocaine, heroine and XTC.

Curtis Warren was born on May 31, 1963 in Liverpool, England. Warren grew up in the Granby district of Toxteth. A tough neighborhood with a bad reputation. At age 11 Warren decided school was not for him and dropped out. He started doing petty crimes and was arrested several times. At age 12 he was arrested for stealing a car. When he reached his teens Warren became a bouncer at a Liverpool night club. In this position he got to get a close look at how the drugtrade worked. A bouncer had the power to let the dealers (and the drugs) in or out, Warren realised this could be very good business. After some time Warren was promoted to the main bouncer and had the task of bossing around the other bouncers, in this position he could fully exploit the dealers and have a good hold on the drugtrade. He got his 'in' and began selling and controlling the drugs. As years passed by Warren got richer and richer and into bigger and bigger deals.

By the late 1980s he teamed up with another English drugtrafficker named Brian Charrington from Middlesbrough, England. In September of 1991 they flew to Venezuela to set up a big cocaine shipment. They had made a deal that the coke would be shipped in steel boxes sealed inside lead ingots, this way they could not X ray the shipment and opening it up would take a lot of effort. When the shipment hit England it was held by customs who were suspicious. They cut open one ingot but found nothing and let the shipment through. Moments later they got a tip from the Dutch police that there was cocaine hidden inside the steel boxes inside the lead ingots, but by now the shipment and Warren were long gone. Lucky for law enforcement a second shipment was on it's way, and this time they were waiting. When the shipment arrived the cocaine was found and Warren and Charrington and several others were arrested. It seemed Warren's criminal career was over and that he was going away to prison for a very long time. Warren and his pall Charrington faced charges of importing shipments of cocaine with a combined worth of 500 million British pounds (around $600 million). All looked set but a wonder was about to happen, two detectives revealed that Charrington was a police informer. The custom agents knew nothing of this informer and it turned out that Charrington, with help of his informer status, had shipped a lot of drugs to Britain. The case was dropped and in 1993 Curtis Warren was acquitted of all charges. Legend has it that after he was set free he went back to the custom agents, walked past them and said: "I'm off to spend my 87 million pounds from the first shipment and you can't fucking touch me."

Back on the streets of Liverpool things were getting dangerous, several organized crime figures were found in holes, burned and with several bullets in their head others were chopped up by machetes. And along with those problems came the thought that the English authorities would come after him with everything they had after their first effort ended in disgrace with the collapsed trial. With all this in mind Warren thought it was a smart idea to move to a nice safe country. And so it was that in 1995 Warren moved his headquarters to Holland. Where most drugtraffickers would choose Amsterdam or Rotterdam as a good place to set up base Warren decided the quiet town of Sassenheim would be perfect. He moved into a very nice villa from where he conducted his business and made his deals. By this time Curtis "Cocky" Warren was a very, very rich and powerful man. He owned houses, mansions and office blocks in Britain, casinos in Spain, discos in Turkey, a vineyard in Bulgaria and his villa in Sassenheim. The rest of his money was stashed away in Swiss bank acounts. Warren could've easily retired to some tropical island but for some reason he didn't. For whatever reason he kept on going, setting up more and more drugdeals and making more and more money. Perhaps it was the rush he got from the smuggling. In the quiet town of Sassenheim Warren felt safe and relatively hidden from the police. From his home he made phonecalls to his friends in England, he didn't know it but police was listening in. Not that it mattered, Warren talked in code. He never named any of his friends by name only by nicknames such as: macker and tacker, the egg on legs, twit and twat, the werewolf and the vampire, badger, boo and loads of other names. But cops are what they are and one thing they are not is quitters, so they continued their surveillance hoping to catch Warren redhanded.

Warren's new shipment plan was already set in place. This time the cocaine from Venezuela would be shipped to Bulgaria where it would be cooked into liquid and held in suspension inside bottles of wine. The cocaine would be put in wine in Bulgaria from there it would be shipped to Holland and then on to Liverpool to be sold. While Warren waited for his cocaine shipment from Venezuela he was already thinking where to stash his new heap of money, but this time people were watching. On October 24th, 1996 the shipment from Bulgaria arrived in Holland and that night Dutch S.W.A.T. units raided Warren's home to arrest him. The unit, using stun grenades, totally surprised the sleepy Warren and put him under arrest without problem. Several of the members of his organization were arrested that same night. At the homes they found 3 guns, ammo, hand grenades, crates with CS gas canisters, 1500kg of heroine, 50kg of XTC and $600.000 in cash money. The shipment was also caught, which combined with the stashes found before would combined be worth 125 million English pounds. All in all you could say Cocky Warren was fucked, but then again he was arrested in Holland, right away things looked a little bit brighter.

At the trial Curtis Warren was charged with importing 800kg of cocaine into Holland and planning to ship it to the U.K. On July 19, 1997 he was found guilty and sentenced to 12 years in prison (God bless Holland with its lax drug laws). Immediately after his sentencing authorities started the search for Warren's riches, estimated at 125 million English pounds by British authorities, so far they have only traced 20 million pounds. They traced it but they can't touch it. 20 million pounds found that they can't touch and over 100 million pounds lost, hidden somewhere in bank acounts or buried somewhere in a backyard in England. The only guy who knew where all that money was stashed was Warren and he never kept any records, never wrote it down and never kept numbers or acounts in a computer. He had it all in his mind, a photographic memory. And as authorities continued their search the man who knew where the treasure was buried was serving his 12 year sentence in the maximum security prison Nieuw Vosseveld in Vught, Holland, and he wasn't planning on telling them anything regarding his golden stash.

After serving over 2 years of relatively quiet time Warren made some noise, he kicked in the head of a fellow inmate. It all happened on the afternoon of September 15, 1999 when Warren was walking around the prison yard. While Warren walked around quietly inmate Cemal Guclu started yelling abuse at Warren. Guclu was serving a 20 year sentence for murder and attempted murder. Yelling abuse at Warren Gurcu walked towards him and tried to punch him in the face. Warren evaded the punch and pushed Guclu against the wall after which Guclu fell to the ground. Guclu tried to punch Warren again but Warren was one step ahead and kicked him in the head 4 times. After this Guclu tried to get up once more before Warren again kicked him in his head after which Guclu lay motionless in the prison yard, his head a bloody mess Guclu was dead on the spot. In February 2001 Warren was back on trial, Warren said he "acted in self defence". The Dutch judge didn't feel the same way and found Warren guilty of manslaughter adding: "the defendant had used excessive violence". The judge sentenced Warren to 4 years in prison. Warren now 37 was now getting out in 2014 and would now serve 16 years instead of 12. And still it could've been worse. Dutch authorities looking for Warrens gold told him that he had to pay them 26 million guilders ($14 million) or face an added 5 years in prison. After some legal chat back and forth an agreement was struck: Warren would pay 15 million guilders ($8 million) and not face an added 5 year term, Dutch authorities agreed and took the money.

Curtis "Cocky" Warren is still in prison serving his time and will be out around 2014. Warren's stash of gold has still not been found and he remains the wealthiest British criminal worth an estimated 125 million English pounds according to authorities and 185 million English pounds according to insiders. It's all stashed away safely and the combination of the volt is safely locked away in Warren's head, unless someone kicks it in ofcourse.

In February 2005 Warren was charged by Dutch authorities of running an international drugs smuggling cartel from his Dutch prison cell. He was found guilty but successfully appealed and was released from prison in June 2007. He was escorted by Dutch police to a ferry terminal. He is currently back in Liverpool and made it clear he wants to “get on with his life in a positive way.”

By late July it became clear Warren hadn't turned his life around. He was charged with conspiracy to import £300,000 controlled drugs into Jersey (a British island near France.) I think Warren couldn't live without the "high" of the smuggle, the crime.