Terrence “Terry” Adams is the head of Britain's most enterprising, and feared, organized crime gang: the Adams family, otherwise known as the A-Team, or the Clerkenwell Crime Syndicate. Terry was the oldest of eleven children, born to a law abiding, working class, Irish Catholic family. He grew up in Islington, north London. Terry was the closest to his younger brothers Patrick (a.k.a. Patsy) and Sean (a.k.a. Tommy) with whom he would go into a life of crime. That life of crime began by extorting money from traders and stallholders at street markets close to their home in the Clerkenwell area, before moving on to armed robberies. Patrick served 7 years in prison for armed robbery in the 1970s.

Terry was the brains behind their criminal operations, Sean dealt with financial matters, and Patrick was the muscle. A former associate of the Adams brothers said the following: “Terry was always the most level-headed one out of the bunch. His brother Tommy was wild and the other brother, Patsy, could be very wild and crazy. A lot of the people involved in this kind of business don't have a lot going on up top. But Terry and his brothers were different. They were a real class act. Terry was always well dressed and in charge of whatever was going on. When he walked into a room, everyone stood up. He was like royalty.”

By the 1980s the Adams family moved into the drug trade. There was a huge demand for cocaine and cannabis in the 1980s, and ecstasy during the 1990s. They built up links with Yardie groups and the Colombian cocaine cartels. The money made was laundered through various corrupt financiers, accountants, lawyers and other professionals, and subsequently invested in property and other legitimate businesses.

Like every criminal group the Adams family ruled through intimidation and violence. They are rumored to have been involved in 30 murders. An accountant, Terry Gooderham, allegedly skimmed £250,000 of drug money from the Adams brothers. He was found dead, alongside his girlfriend, in Epping Forest in 1989.

A rival Irish family, the Reillys, challenged the Adams family’s dominance of Islington. Patrick Adams and an associate went into a pub controlled by the Reillys. There the Adams associate insulted a Reillys member. The Reillys went away to arm themselves and returned to the pub. It was an ambush, their BMW was fired on repeatedly by members of the Adams gang. No one was killed, but the incident sent out a clear message: the Adams family runs Islington.

By the late 1990s the heat was on. In 1998 Sean “Tommy” Adams was convicted of organizing an £8 million hashish smuggling operation, and was sentenced to 7 years imprisonment. When a judge ordered that he surrender some of his profits or face a further 5 years, his wife turned up twice to the court, carrying £500,000 in cash inside a briefcase on each occasion.

In May 2003 Terry Adams was arrested and charged with money laundering, tax evasion and handling stolen goods. He was released on £1 million bail. And in February 2007 he pleaded guilty to conspiracy to launder £1.1million. The Judge said: "Your plea demonstrates that you have a fertile, cunning and imaginative mind capable of sophisticated, complex and dishonest financial manipulation." On March 9 Terry Adams (52) was sentenced to 7 years in prison. After serving over three years in prison, Terry Adams was released in June of 2010. According to English newspapers, Adams was picked up in a "top-of-the-range Porsche Cayenne followed by a £60,000 Range Rover". 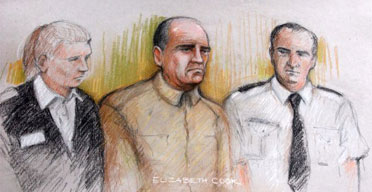 Some of the housing estates in East,South and parts of North London,as well as most big British cities,are the equivalent of the American housing projects.They are as tough as anything you would find in the Bronx or Jamaica,Queens.