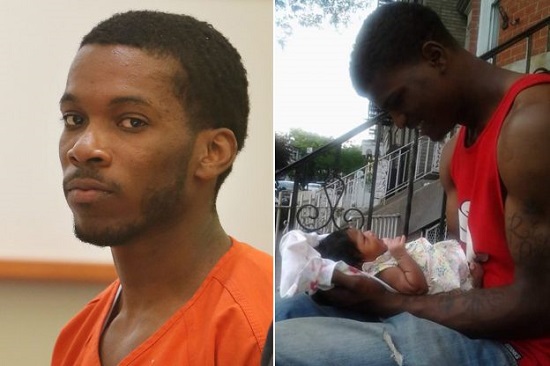 Even among hardcore gangsters the heinous crime committed by James Capers (photo above, left) is considered crossing a line. Dealing drugs? Of course! Some robberies? Fine! Murder? Part of business. Shooting a rival while he is holding his 1-year-old daughter in his arms? Fuck no.

Yet, that’s exactly what Capers did, according to a federal jury that found him guilty of murder, racketeering, and narcotics conspiracies in December of 2016. As a member of the Leland Avenue Crew, which controlled the distribution of crack cocaine in and around Leland Avenue in the Bronx, New York, Capers sold drugs, carried weapons, and committed robberies of unsuspecting people on the street.

He also did his part in the Leland Avenue Crew’s long-running war with a gang on Taylor Avenue in the Bronx. As the two groups battled over drug territories, there were several shootings, some of which resulted in death.

One of them involved Capers, who went by the nickname “Mitch.” On July 7, 2015, he went looking for Allen McQueen, a rival gang member on Taylor Avenue. He spotted McQueen (photo above, right) walking down the street holding his 1-year-old daughter. Rather than deciding to wait for another shot, Capers ran up behind McQueen and fired several shots, striking his rival once and killing him on the spot.

On June 2, Capers was sentenced to 42 years in prison for his vicious crimes.