Twenty men, including five alleged members of the notorious Los Zetas drugs cartel, are facing federal narcotics charges in the United States. Based in Chicago, the cell is said to have been responsible for transporting millions of dollars in drug proceeds between the American city and Mexico.

A joint investigation led by the Drug Enforcement Administration and the Federal Bureau of Investigation resulted in the charges, as well as accumulated seizures during 2010 of more than $12.4 million cash and approximately 250 kilograms of cocaine in the Chicago area. An additional $480,000 cash and two kilograms of heroin were seized on November 15.

All twenty Chicago defendants were charged with various narcotics offenses, including conspiracy to possess and distribute quantities of cocaine and using a telephone to facilitate narcotics trafficking. The five alleged members of the money transportation cell of the Zetas were also charged with conspiracy to transfer narcotics proceeds outside the United States. Of the twenty men, five remain a fugitive and are sought by law enforcement.

One indictment alleges that defendant Eduardo Trevino, a fugitive believed to reside in Nuevo Laredo, Mexico, directed a money transportation network for the Zetas from Nuevo Laredo, and that this network coordinated the transfer of money from places such as Chicago to Laredo, and then from Laredo to Mexico. At the direction of the Zetas, defendant Salvador Estrada (right) allegedly collected, processed and concealed cash from the sale of drugs so that the narcotics proceeds could be transported by truck drivers, including defendants Miguel Arredondo and Vicente Casares, from Chicago to Laredo, knowing that the proceeds would be transported to the Zetas in Mexico. Defendant Juan Aguirre allegedly worked with the others to coordinate the delivery of cash proceeds to truck drivers.

According to the indictment, the following seizures, totaling $12,452,685, were made during the course of the investigation: 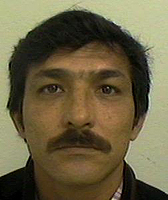 The 14-count indictment against Trevino (right) and the five alleged Chicago cell members seeks forfeiture of approximately $13 million, including the $12.45 million seized previously. Five of the six (named above) were charged with conspiracy to transport narcotics proceeds outside the United States. Together with defendant, Aureliano Montoya-Pena, all six were charged with conspiracy to possess and distribute more than five kilograms of cocaine and various other narcotics offenses. The other four indictments charge the remaining 14 defendants with various narcotics distribution offenses.

Special Agent-in-Charge of the Chicago Field Division of the DEA Jack Riley told the press about the importance of this bust: “DEA’s commitment to hitting alleged drug trafficking organizations from all angles is especially evident when you consider the impact of the seizure of over $12 million in suspected drug proceeds. In the specific indictment that alleges affiliation of some of the defendants with the Zetas, the influence of Mexican criminal organizations in the wholesale Chicago drug market is apparent. The severing of those ties is of the upmost importance to the DEA.”