Anthony Spilotro was born on May 19, 1938 in Chicago. Spilotro grew up in a loving family, and seemed to be on track for a decent and honest life. But he decided he wanted something else, and in his sophmore year at Steinmetz Highschool he dropped out and turned to a life of crime. Once out of school he joined forces with other Steinmetz dropouts and engaged in petty crimes, like shoplifting and purse snatching. On January 11, 1955 Spilotro is arrested for the first time, for stealing a shirt. He is fined ten dollars and is put on probation. But after several more arrests Spilotro receives some special attention from the police. By 1960 Spilotro has been arrested thirteen times and he feels he is ready for the next step in his criminal career.

To get anywhere as a criminal in Chicago you had to be connected to the Outfit, the Chicago Family of La Cosa Nostra. And that's exactly what Spilotro did, he hooked up with Outfit enforcer "Mad" Sam DeStefano. Spilotro starts out as a debt collector for DeStefano but quickly gets involved in bigger crimes. Stay involved with the Mafia long enough and you'll be asked to commit that century old crime: murder. In 1962 Spilotro "makes his bones" in the M&M killings. "Making your bones" means committing a mob ordered murder for the first time. Together with mob hitters DeStefano, Felix Alderisio, and Chuckie Nicoletti, Spilotro tortured criminals Bill McCartney and Jimmy Miraglia. McCartney's head was put in a vice untill his eye popped out. After this gruesome murder Spilotro was considered golden material for the Chicago Outfit. After the M&M murders in 1963 Spilotro became a made guy in the Chicago Outfit and left Mad Sam DeStefano's crew to join Felix Alderisio's crew instead. 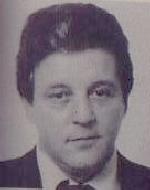 Now a member of the Chicago Outfit Spilotro got assigned to a bookmaking territory on the North West Side of Chicago. There he controlled a few dozen bookmakers. In 1964 Spilotro was sent to Miami to work with Frank "Lefty" Rosenthal, who was big in sportsbetting. Rosenthal was sent to Miami to control Chicago Outfit interests there, and Spilotro was there to see to it that things ran smoothly and nobody tried to muscle in on their operations. By 1967 Spilotro was back in Chicago fulltime. In 1971 Spilotro is assigned to Las Vegas where he replaces Marshall Caifano. Spilotro sets himself up in the Circus Circus Casino and conducts his business from the gift shop there. Spilotro operated under the name Anthony Stuart, Stuart was his wife's maiden name. The moment Spilotro arrived in Las Vegas he started taking care of lose ends. There were five murders where the victims were tortured before they were killed, and several casino employees were found buried in the desert.

In September 1972 Spilotro had to come back to Chicago, when he was indicted in the Foreman case. He was indicted along with Mad Sam DeStefano, and his brother Mario DeStefano. Another criminal, named Crimaldi, who was present at the Foreman killing, had flipped and was the star witness. Things looked bad for Spilotro, especially considering Mad Sam's crazy court antics. Spilotro and Mario DeStefano figured that they had a chance of beating the case if they could somehow seperate their case from Mad Sam, and so they decided to take Mad Sam out themselves. In May of 1973 Mario DeStefano and Spilotro set up Mad Sam at his home and murdered him with a shotgun. On May 22, 1973 Mario DeStefano was found guilty and Spilotro was acquitted and went back to Las Vegas. But problems weren't over yet, new indictments were coming. This time Spilotro was indicted together with Joseph Lombardo. Again there was a witness, but that was no problem for Tony and Joey. In September of 1974 they found the witness and blew his head off. Without the witness there was no case and Spilotro and Lombardo were acquitted of all charges. Spilotro went back to Vegas for a final time.

In Las Vegas he saw to it that the skim from the casinos went as planned and that no other mobsters moved in on their operations. Spilotro worked closely with his old partner Frank Rosenthal who was the boss of the Stardust Casino. But after a few years things started going bad for Spilotro. In 1979 he was added to the Las Vegas black book, an exclusion list which included people that could not set foot in any of the Las Vegas casinos. Spilotro was outraged but it didn't stop him from running his Las Vegas business. Besides the casinos Spilotro also started his own gang named "The Hole In The Wall Gang". This gang was made up out of Spilotro and his brother and their associates. They were called the hole in the wall gang, because when they committed a burglary they would gain entry by making a hole in the wall. This gang was against the Outfit's orders, the Outfit ordered Spilotro to keep quiet, and a gang of thieves wasn't exactly quiet. But the hole in the wall gang wasn't the worst thing Spilotro did. Rumors were floating around that Spilotro was selling drugs and sleeping with the wife of Frank Rosenthal. When word got back to the Outfit bosses, Spilotro's time was up. On June 14, 1986 Spilotro and his brother Michael were summoned to an Outfit meeting. They were beaten with baseball bats, and driven to an Indiana cornfield where they were buried in a shallow grave. And so was the end of one of Las Vegas most notorious mobsters.