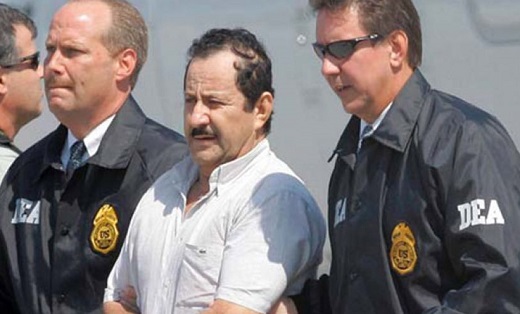 Hernan Giraldo Serna, a senior paramilitary leader and one of Colombia’s most notorious drug traffickers, was sentenced on Friday to serve over 15 years - 198 months to be exact - in prison for his role leading an international drug trafficking conspiracy responsible for the importation of ton-quantities of cocaine into the United States.

The paramilitary drug boss had pleaded guilty in 2009 to one count of conspiracy to distribute cocaine knowing and intending that it would be imported into the United States. Serna admitted he ascended to a leadership position within the Autodefensas Unidas de Colombia (United Self Defense Forces of Colombia or AUC), a terrorist and paramilitary organization in Colombia in 2009.

The AUC was designated a Foreign Terrorist Organization by the U.S. Department of State in September of 2001. In May 2003, the AUC was also placed on the Significant Foreign Narcotics Traffickers list by order of the President, pursuant to the Foreign Narcotics Kingpin Designation Act.  Subsequently, in February 2004, Giraldo Serna individually was designated as a Tier II Kingpin by the Department of Treasury’s Office of Foreign Assets Control, subjecting him to severe economic sanctions under the Kingpin Act.

As leader of the AUC he commanded an armed force which controlled a significant part of northern Colombia. Giraldo Serna admitted that, from the early 1990s through the early 2000s, soldiers operating under his direction controlled large areas in northern Colombia where cocaine was cultivated, produced and distributed. He provided security for drug traffickers in the region under his control, including those individuals responsible for coca cultivation and distribution.

“The sentence demonstrates the successful and vigorous partnership we have with our law enforcement colleagues in Colombia. We have been able to disrupt the flow of drugs coming from the north coast of Colombia, and punish the narco-traffickers responsible,” said Acting Assistant Attorney General Kenneth A. Blanco. “International drug traffickers who believe they can operate with impunity learn the hard way that they cannot, and we will continue to work with our international partners to bring to justice those who knowingly transport cocaine to the United States.”