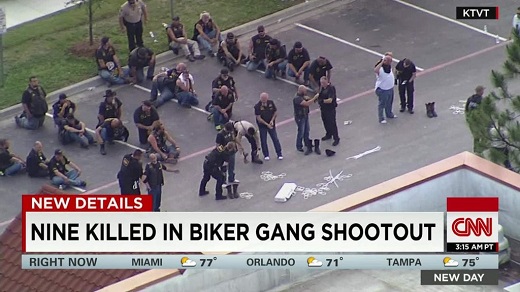 Three officers of the Waco Police Department have been cleared by an internal investigation and grand jury Wednesday in relation to the deadly biker shootout at Twin Peaks restaurant in May of last year.

The officers – all multi-year department veterans – arrived at Twin Peaks to find over a hundred members and associates of the Bandidos and Cossacks outlaw motorcycle gangs involved in a violent gunfight.

After everything calmed down, nine people lay dead, while twenty people were injured. Investigators found over 300 weapons laying around on the ground at the crime scene. Over 170 people were arrested and the majority has since been charged with engaging in organized criminal activity.

Despite the arrests, it remains unclear whether those killed by gunfire were victims of biker rivals or the police. Regardless of how these victims died, the three officers have now been cleared of any wrongdoing during the shootout.

According to a statement by the Waco Police Department, “The McLennan County Grand Jury met this morning and completed their review of the Officer Involved Shooting that occurred at Twin Peaks on May 17, 2015. The three officers were No Billed in today’s hearing.”

Interim Chief Frank Gentsch, upon hearing of the Grand Jury decision, stated “These officers acted professional under very difficult circumstances. I’m glad to have this caliber of officers protecting our city. I appreciate the job conducted by the Department Investigators, the Texas Rangers, the McLennan County DA’s office and the Grand Jury in this case. I will be returning these officers to full duty immediately.”

Get the latest on organized crime and the Mafia at our news section.