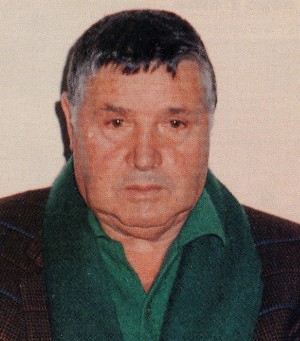 Salvatore Riina was born on November 16, 1930 in Corleone, Sicily. He was introduced into the Corleone “family” by his uncle Giacomo Riina, himself a “man of honour”, when the boss was the doctor Michele Navarra, nicknamed “Our Father”, powerful and respected by the entire village. After the second World War when the Fascist dictatorship finished, the Corleone family was almost decimated, but it was reorganized by Angelo Di Carlo, cousin of Navarra, and Vincenzo Collura, both had emigrated to the United States in the 1920s and returned to rebuild the powerful local family. Di Carlo, who was a marine during the war and had strong connections inside politics, wanted Navarra as the boss and with the agreement of the most important Sicilian bosses (Calogero Vizzini from Villalba, Genco Russo from Mussomeli and Vanni Sacco from Camporeale), Navarra was designated boss, Collura underboss, and Leoluca Leggio consigliere. But the new boss wasn’t well received by all the members, especially Collura who wanted to be the boss himself; behind him a brunch of young people, lead by “capodecina” Luciano Leggio, nephew of Leoluca, were going to move war against Navarra.

The young Riina joined Leggio’s faction, and in 1949 he killed Domenico Di Matteo. That was his first murder. After six years in prison, he was released and returned to Corleone. In that poor and rural village, where Leggio’s faction controlled cigarettes smuggling, extortion and robberies, a new and more profitable business was on the rise: public contracts. The Italian government was going to build a huge dike on the Belice river (worth about 20 million dollars at that time), and the “young lions” were ready to control subcontracts. The illiterate farmers lead by Leggio would contend the business to the doctor Navarra; they were poor but have the best killers of the village: Salvatore Riina and Bernardo Provenzano.

On August 2nd 1958, Riina and his friends shot to death Navarra while he was driving his car and the war started suddenly. From that date to 1963, 140 members of both factions, were murdered in Corleone. At the end of the war the young faction won; Luciano Leggio became the new boss, Salvatore Riina the underboss and Bernardo Provenzano the consigliere.

The State reacted to the violence, but in 1969 the Corleone mafia war’s trial absolved all the defendants, included Riina, Leggio and Provenzano. When Luciano Leggio was arrested in 1974, Riina became the official boss, replaced Leggio inside the triumvirate with Gaetano Badalamenti from Cinisi and Stefano Bontade from Palermo, which ran Cosa Nostra until the Commission would be reorganized, and started his escalation which nobody will ever stop in the future.

He became one of the most important, but also violent, boss in the mafia history; turncoat Tommaso Buscetta told about him: “beasts don’t reason, they just live of instincts, instead he reasons; Totò Riina was simply the Attila’s clone, where he passed he took the destruction, inside mafia, politics, normal people…”.

From the ending of 1970s to the beginning of 1980s, Riina became to move war against the bosses who didn’t agree with him, but also against policemen, politicians, journalists and judges who fought Cosa Nostra; the mafia war left hundreds dead, and at the end he designated himself boss of bosses; he had connections inside every families, and formed a group of loyal people who supported him during the war against Bontades and Badalamentis.

He replaced old bosses and created a new Commission, where all people were ordered by him; but in 1992 after judge Falcone and Borsellino slaughters, the State reacted heavily to his violence and fought him and his allies for a few years. In 1993 Salvatore Riina was arrested after 23 years of fugitiveness and sentenced to life; his empire was going to break down; his wife, sons and relatives still live in Corleone, but his power is not the same behind bars, also because he was replaced by Provenzano how he once replaced Leggio.