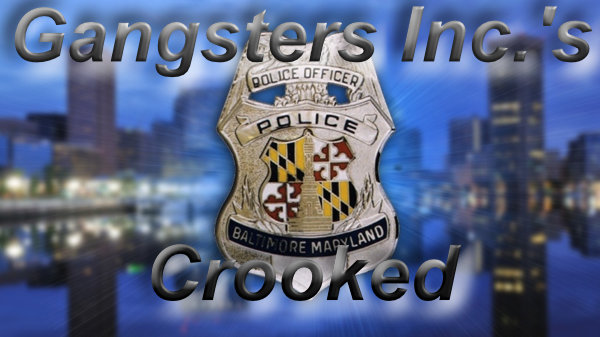 “Few things threaten our society more than public servants who betray their oath for personal gain” - Special Agent in Charge Gordon B. Johnson of the FBI's Baltimore Division

In society a select group of people is tasked with serving and protecting the public. Throughout history an ever-fluctuating percentage of this group has chosen to get one over on the people instead. They take bribes from powerful figures in business or crime, defraud citizens or decide to become criminals themselves under the protection their position affords them.

In the Crooked series Gangsters Inc. highlights these individuals.

The year has just begun and already two men who swore to uphold and protect the law find themselves in a cell for their crimes. 49-year-old Corrections Officer Paul Hursey received a 30-month prison sentence this week after he had pleaded guilty to conspiracy to commit extortion under color of official right.

Hursey worked at the J.T. Vaughn Correctional Center (“JTVCC”) from 2013 through 2015, but instead of doing his job, he decided to get in on the action. He smuggled drugs, including heroin, and 30 cell phones to eleven different inmates in return for money. He did so knowing those inmates were using the smuggled cell phones to orchestrate their own smuggling routes for drugs and more phones into JTVCC.

Following Hursey’s sentencing, Acting U.S. Attorney Weiss stated, “The defendant was charged with keeping JTVCC safe. Instead, he committed an abuse of trust that made the prison manifestly less safe - where his charge was to protect the inmates and his colleagues, the defendant’s prison smuggling endangered them.”

“Few things threaten our society more than public servants who betray their oath for personal gain,” added Special Agent in Charge Gordon B. Johnson of the FBI's Baltimore Division. “The FBI in Delaware, along with our state and federal partners, are sending a strong message today that we will not tolerate corruption in the prison system which tarnishes the good work of the dedicated and committed correctional employees.”

Johnson’s words come too late for former Baltimore City Police Sergeant Wayne Earl Jenkins. On Friday, the 37-year-old pleaded guilty to racketeering, robbery, destruction, alteration, or falsification of records in a federal investigation, and four counts of deprivation of rights under color of law.

Jenkins joined the Baltimore Police Department (BPD) on February 20, 2003 and was promoted to Sergeant on November 20, 2013. On June 13, 2016, Jenkins became the Officer in Charge of the Gun Trace Task Force (GTTF,) a specialized unit within the Operational Investigation Division of the BPD.

As a cop Jenkins schemed to steal money, property, and narcotics by detaining victims, entering residences, conducting traffic stops, and swearing out false search warrant affidavits. He participated in seven separate robberies between May 2011 and August 2016, and also stole dirt bikes from individuals who were riding them illegally on city streets and then sold them through an associate.

The dirt bikes were peanuts compared to the 4 to 5 boxes, containing approximately 12 pounds of high-grade marijuana that had been intercepted by law enforcement from the U.S. mail, as well as prescription medicines that he had stolen from someone looting a pharmacy during the April 2015 riots. Jenkins admitted he gave an associate drugs he stole from detainees and arrestees, including cocaine, marijuana and heroin. The associate was able to sell these and shared the proceeds with Jenkins. In total, Jenkins earned $200,000 to $250,000 from the hustle.

In an effort to conceal his true identity, Jenkins told detainees and arrestees that he was a federal task force officer, which he was not, and told his co-defendants to identify him as the U.S. Attorney. He prepared and submitted false official incident and arrest reports, reports of property seized from arrestees, and charging documents. The false reports concealed the fact that Jenkins and his buddies had stolen money, property, and narcotics from individuals.

If all of that wasn’t low enough, he routinely submitted false and fraudulent individual overtime reports, thereby defrauding the Baltimore Police Department and the citizens of the State of Maryland. On these reports, he falsely certified that he worked his entire regularly assigned shifts, when he did not, and that he worked additional hours for which he received overtime pay, when he had not worked all and in some cases any of those overtime hours. Jenkins also admitted that he submitted false and fraudulent overtime reports on behalf of his co-defendants.

Jenkins admitted to obstructing law enforcement by alerting his co-defendants when he learned that his crew was under investigation from other BPD officers and from an Assistant State’s Attorney in the Baltimore City State’s Attorney’s Office.

Such alerts came with a threatening warning. When Jenkins and his crew were detained in the Howard County Detention Center, he ordered them to “keep their mouths shut” and “stick to the story.”