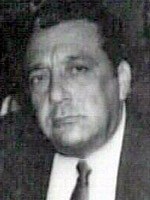 José Miguel Battle Sr. was one of the most powerful crime bosses in the US. Born in Cuba he was a policeman in the pre-Castro era ruled by dictator Fulgencio Batista. Batista had a good relationship with several of America's wealthiest mobsters, among them New York bosses Charles "Lucky" Luciano, Meyer Lansky, and Florida boss Santo Trafficante. Batista allowed the mobsters to build and run casinos in his country. The casinos made Batista and the US mobsters millions. But Batista's government fell when Fidel Castro and a small group of rebels seized control of Cuba and Batista fled to the Dominican Republic.

Watch: VIDEO: How Cuban mob boss Battle’s desire for revenge drove him off the deep end

Battle Sr. joined the anti-Castro forces in the US and was involved in the 1961 Bay of Pigs invasion. The invasion was backed by the CIA but failed miserably, and almost all of the Cubans, including Battle, taking part in the invasion were arrested by Castro forces. Battle Sr. would serve almost two years in a Cuban prison. When he was released he went back to the US, but this time he became involved in crime. In New Jersey he got involved in a strip club and illegal gambling (illegal cockfighting and an illegal lottery called "Bolita".)

His illegal business expanded rapidly, and so did his group of soldiers, by the 1970s he had operations going in New Jersey, New York, and Florida that made his group $45 million a year. His group was called "La Corporacion" or The Corporation.

In 1977 Battle Sr. was arrested and charged with murdering Ernestico Torres, one of his soldiers. Torres was killed in a Miami suburb. Battle Sr. was convicted and sentenced to 30 years in prison. It looked like his successful life of crime had come to an end, but an appeals court overturned the sentence. 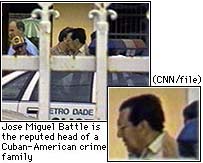 In the early 1990s Battle Sr. was worried again when several of his associates were indicted. So he fled to Lima, Peru where he built a hotel and casino complex. But when the smoke settled he moved back to his $1.5 million Florida ranch. By now his legit wealth was estimated at at least $175 million. The Corporation was making hundreds of millions from gambling and drug dealing, and operated in the US, Central- and South America, the Carribean, and Europe.

In 2004 Battle Sr, his son Jr., and four other Corporation leaders were indicted and charged with five murders, four arson attacks resulting in eight deaths, and more than $1.5 billion collected from drug trafficking, bookmaking and numbers rackets. Nineteen other members were also indicted. In May of 2006 Battle Sr. pleaded guilty because of his declining health. He was sentenced to twenty years in prison. His son Battle Jr. was convicted after a trial and sentenced to fifteen years and eight months in prison and ordered to forfeit $642 million.

But before he could serve his sentence José Miguel Battle Sr. died at a medical facility in South Carolina at age 77.

Gangsters Inc. Exclusive: Story of Jose Miguel Battle Sr. to be told in book The Corporation by T.J. English, which in turn will be adapted for the screen by Paramount with actor Benicio Del Toro starring as the Cuban godfather. Read our exclusive interview with T.J. English.