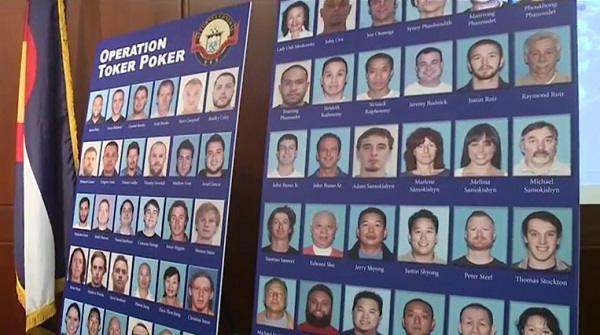 Under the guise of legitimacy, defendants posing as medical marijuana patient caregivers, property managers servicing marijuana growers and small business owners, allegedly ran what is alleged to be the largest illegal marijuana trafficking ring since marijuana was legalized in Colorado, trafficking thousands of pounds of marijuana out of state in a massive illegal interstate weed distribution and cultivation network stretching from Colorado to Texas.

Certain members of the conspiracy are alleged to have engaged in securities fraud, swindling close friends, business associates of friends, wealthy business persons, and even Erik Pears and Joel Dreessen, both former NFL players of the Denver Broncos, by making the victims believe their investments were destined for state licensed marijuana grow facilities.

In one year, between March of 2016 and February of 2017, law enforcement officials executed nearly one hundred fifty search warrants. At of the time of the indictment the dismantling of the organization lead to the seizure of nearly 2600 illegally cultivated marijuana plants and 4,000 pounds of marijuana. These seizures are believed to only scratch the surface of the amount of illegal drugs produced by this organization.

Furthermore, financial documents obtained by investigators revealed that millions of dollars in drug revenue passed through the collective “hands” of the drug trafficking organization’s members. The enterprise produced over 100 pounds of marijuana per month on average.  The going rate is approximately $2000 per pound so the revenue would have easily exceeded $200,000 per month from January of 2012 until Spring of 2016.

During the ring’s operation, the co-conspirators allegedly controlled the illegal cultivation and distribution of marijuana at 18 warehouses and storage units and 33 residential homes throughout the Front Range. The drug traffickers laundered the proceeds of their illicit activity all the while avoiding the payment of taxes. They disguised much of their criminal activity through front companies that included a marijuana grow supply store and numerous purported property management companies leasing to marijuana growers.

“Since 2014 there has been an influx of these organized criminal groups to Colorado for the sole purpose of producing marijuana to sell in other states,” stated Special Agent in Charge Barbra Roach of the DEA's Denver Field Division. “Many of these operations involve multiple, sometimes dozens, of homes that are converted into grow sites. Members of these organizations relocated to Colorado in organized cells that then orchestrated the numerous grow operations producing tons of marijuana for out-of-state markets. Because of this the marijuana black market has increased exponentially since state legalization. Our communities pay the price for this and see nothing in return.”

“This case is a prime example that the black market for marijuana has not gone away since recreational marijuana was legalized in our state, and in fact continues to flourish,” said Attorney General Coffman. “These trafficking rings are not just operating in the shadows, they are invading our neighborhoods and are often conducting their illegal activity in plain sight under the guise of being a legitimate business.”

“The Toker Poker operation dealt a major blow to the illegal marijuana industry,” said Denver Police Chief Robert C. White. “The success of stopping this illegal operation was due to the collaboration of multiple federal, state and local partners, which included more than 250 police officers, who worked tirelessly in to bring these criminals to justice.”