Did El Chapo put a $100 million bounty on Trump or not? American billionaire Donald Trump hasn’t minced words during his campaign to become the Republican nominee for President. Attacking everyone from his fellow candidates and rival Democrats to Fox News and Forbes. But it’s his attack on Mexicans that seems to have caused the most uproar. So much so that Mexican drug lord ‘El Chapo’ Guzman is rumored to have placed a bounty on Trump’s head: $100 million, dead or alive.

Apparently, ‘El Chapo’ was furious after Trump said Mexico sent rapists, drug traffickers, and criminals across the border into the United States.

Though it is nothing more than a rumor, so far, it’s a persistent one. Originating from an anonymous prison source and shady Twitter accounts claiming to be – or close to – Joaquin ‘El Chapo’ Guzman it has now entered the world of facts, of things that need to be taken into account.

One man who can relate to this story on several levels is former FBI agent Jack Garcia. Now retired, he spent decades working cases undercover infiltrating drug cartels and the Gambino crime family in New York resulting in a prize being put on his head by the Mafia.

The threat was taken seriously by the FBI but Garcia tells Gangsters Inc. that he “didn’t believe it one bit.” And he had good reason to, he says. “Mobsters don't fuck around with law enforcement, especially the FBI, because they know the consequences. The reign of terror would fall upon them if they ever took out an agent. Now I'm sure you have heard of Everett Hatcher, the DEA agent killed by [Bonanno mobster] Gus Farace. The FBI and DEA hit them so hard that they went and killed him in order to get us off their backs. I heard that a wiretap even revealed that one mobster said, ‘Find this guy, kill him, and throw him in front of the DEA office.’”

Garcia thinks the same would happen to Guzman if he ever succeeded. “Going after Trump would be suicide. ‘El Chapo’ is a stone cold killer and a businessman. He doesn't want the heat, especially with an American like Trump,” he says resolutely.

“’El Chapo’ is in the wind. He just wants to disappear. The longer he stays in the spotlight, the more agents and people go looking for him. Look what Whitey Bulger did, he became a ghost and was on the lam for ages. Chapo’s only mission is to lay low and become yesterday's news,” the former FBI agent says.

What about standing up for Mexico and his fellow citizens? Could Guzman be trying to do that? “This is an interesting question. In my opinion, I don't think that El Chapo, Escobar or any mobster gives a rat ass about patriotism or the poor. They do and say these so called nice things about their country or people to garner support in the event they are arrested and need them on their side. These guys’ only allegiance is to making money, their criminal organization, and establishing power. How can people say that Chapo cares about what Trump says about Mexicans when he decapitates and slaughters Mexican families? He doesn't care.” 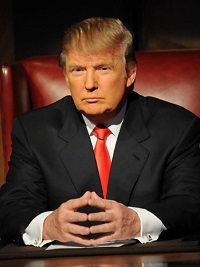 So back to the threat, does Garcia think it’s real? No. “It's definitely someone messing around,” he says. “I get a kick out of these prices on peoples’ head. Like how and from who would you collect the bounty? From ‘El Chapo’ himself?” he laughs.

“As for what Trump is doing,” Garcia continues, “He travels like a rock star with amazing security. I know a couple of guys who bodyguard him and his family and they are tops. Personally, I don't think Trump is worried one bit. He might be worried about his family, but that’s the price of being a celebrity. I think Trump has more to worry about from some crazy liberal left wing nut than ‘El Chapo.’”