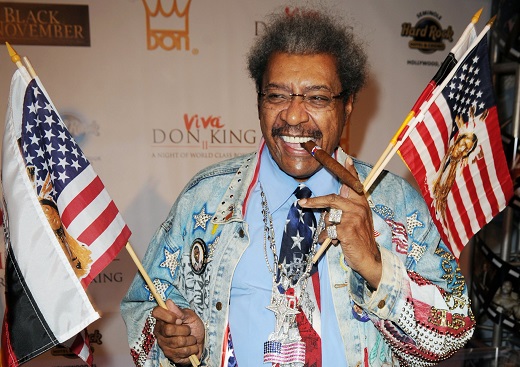 With two killings under his belt and a long record of exploiting boxers in his employ, some might say that legendary promoter Don King exemplifies the type of character that has historically populated the fight game. At the professional level, the so-called “sweet science” is generally a grimy business. And King, perhaps more than anyone else in boxing, set the standard for dirty, low-down dealing.

During his career, King represented a string of boxing greats, including Muhammad Ali, George Foreman, Mike Tyson and Larry Holmes, all of whom would file lawsuits against him. King’s early years were spent in Cleveland, Ohio as a feared numbers runner and loan shark with ties to the city’s mob. While still in his teens, King gained a reputation for dealing severely with transgressors. In 1954, he shot a man in the back when he discovered him allegedly trying to rob one of his illegal gambling parlors. A police review ruled the shooting a justifiable homicide. In 1966, he encountered an employee, Sam Garrett, outside of the Manhattan Tap Room on Cleveland’s Cedar Avenue. Angered over an unpaid $600 gambling debt, King stomped the smaller Garrett to death on the sidewalk. King was convicted of manslaughter and served four years in prison.

Now, some members of Cleveland City Council are proposing to honor their native son by renaming a stretch of Cedar Avenue, near where Garrett was killed, as “Don King Way.”

To use King’s own catchphrase: “Only in America.” 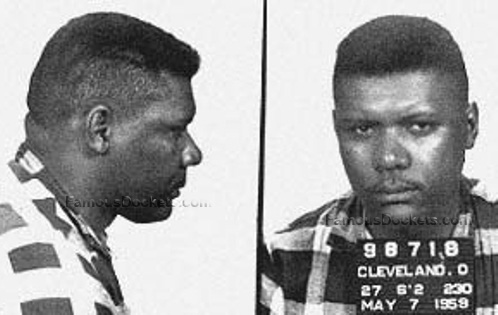 Born in Cleveland in 1931, King (photo above) was a numbers runner, loanshark, bookmaker, and an amateur boxer before becoming a boxing promoter and manager. While serving time for the Garrett murder, King listened to Muhammad Ali and Joe Frazier’s “Fight of the Century” in 1971. King was inspired by the historic event and one year later, convinced Ali to come to Cleveland to participate in a charity boxing match to support a local hospital. However, an investigative report compiled years later by ESPN revealed that the hospital only received $1500 of the $85,000 collected in ticket sales.

King’s association with Ali would lead to him winning the rights to promote the “Rumble in the Jungle” in Zaire between Ali and then-heavyweight champ George Foreman. The next year, he promoted the "Thrilla in Manila" between Ali and Joe Frazier in the Philippines.

King would go on to promote many world championship bouts and represent dozens of top boxers. However, he was strongly criticized for his practice of representing both opponents in a title fight. He did this through the use of a contractual clause that required a boxer who wished to challenge a fighter belonging to King to agree to be promoted by King in the future if he won. Thus, no matter which boxer was victorious, King represented the winner. Those who balked at King’s terms would find it very difficult to obtain fights, especially title fights, with boxers who were promoted by King.

King’s early career was marked by his violent response to anyone who cheated him. But he didn’t seem to have any compunction against defrauding others. King would frequently deliver a one-two punch to boxers—cheating them and then, when sued, dragging out the litigation for years until agreeing to settle for a paltry amount. In 1982, he was sued by Muhammad Ali for underpaying him $1.2 million from a fight purse years earlier. After a legal battle, he settled with Ali (who was, at that time, hospitalized and in financial straits) for $50,000 in cash.

Larry Holmes, Tim Witherspoon, Terry Wayne Norris, Meldrick Taylor, and many others would accuse King of shortchanging them. They would eventually settle for a fraction of the amount they were owed. He paid Witherspoon only $90,000 of a $500,000 purse, explaining that his stepson, Carl King (who was Witherspoon’s manager), was contractually owed 50 percent of the boxer’s purse, or $250,000.

In some cases, King would use his mob connections to threaten violence to a disgruntled fighter. In Meldrick Taylor’s case, he was warned to drop a legal action or he would be killed.

Former heavyweight champ Larry Holmes, who claims King cheated him out of $20-$30 million over his career, famously likened the promoter to Satan, saying, “His hair sticks up to hide his horns.” Holmes sued King after King deducted an inexplicable $300,000 ‘finder's fee’ from his fight purse against Mike Tyson. Holmes settled for $150,000 and also signed a legal agreement promising not to disclose negative information about King. When Holmes’s manager, Richie Giachetti, also a Cleveland native, wanted to report King to the FBI, Holmes declined to help, reportedly saying, “King has a lot of bad friends…I’m scared for my family. I’ve got to be careful. He can hurt me.”

King’s intimidation tactics didn’t always work though. In 1998, boxing champ Mike Tyson sued King, claiming the promoter bilked him out of $100 million. The case was settled out of court for $14 million. But not before Tyson tracked down King in Los Angeles and thrashed him outside of a hotel.

Explaining why he beat up King, Tyson told an interviewer, “[I was angry] that he refused to admit any wrongdoing. I confronted him. He basically denied it and I attacked him in front of these old decrepit white women. King is a wretched, slimy, reptilian motherfucker. This is supposed to be my ‘black brother’, right? He's just a bad man, a real bad man. He would kill his own mother for a dollar. He’s ruthless, he’s deplorable, he’s greedy...and he doesn't know how to love anybody.”

King’s ties to organized crime have long been suspected. During the 1980s, an FBI investigation led by agent Joe Spinelli, conducted a four-year probe into corruption in boxing. Spinelli would later write about the investigation in an issue of Sports Illustrated magazine. In the Nov. 3, 1991 New York Times, Dave Anderson wrote about Spinelli’s investigation and his revelations in the Sports Illustrated article.

“Acording to Spinelli,” wrote Anderson, “An undercover agent using the name Victor Quintana pretended to be a multimillionaire drug dealer who hoped to launder money as a boxing promotional partner. Quintana met with King early in 1983 after being ushered into the promoter's office by Michael Franzese, then a capo in the Colombo crime family, and the Rev. Al Sharpton, who acknowledges having been a FBI informant later but not at the time of the meeting. Shortly afterwards, Spinelli recalls, the FBI abruptly canceled its investigation. Two months earlier, South Korean lightweight Duk Koo Kim died after being knocked out by Ray Mancini in a title bout. According to Spinelli, the FBI office in Washington did not want to risk being involved in a boxing promotion that could possibly result in a boxer's death. Two months later, Quintana met Danny Pagano, a Genovese crime family soldier. When Pagano found out that Quintana had met King through Franzese, Pagano said, ‘What did you go to Michael for? King’s with us.’”

King was even called before a 1992 U.S. Senate committee to discuss his connection to mob boss John Gotti and Matthew “Matty the Horse” Ianniello. King invoked the Fifth Amendment, refusing to answer any questions. He was charged with tax evasion, but the case was dropped.

In 1983, Ohio Governor Jim Rhodes pardoned King’s 1966 manslaughter conviction (a move that was rumored to have been spurred by a King bribe).

In September of this year, when Cleveland City Council proposed the naming of Don King Way, some members noted that King, now 85, had turned his life around. Without explaining why that particular stretch was chosen, they pointed out that King, who is worth an estimated $150 million, has donated millions of dollars to various charities in his hometown.

But other members questioned the wisdom of the street renaming, noting the proximity to King’s murder of Garrett.

However, even when reminded of Garret’s brutal beating, a Cleveland council member argued in support of the renaming, saying that many street names can be considered controversial. “Some of the streets in America are named after, if you look at the history, former slave owners,” he said, according to a Cleveland Plain Dealer article.

A 1966 police report written by Cleveland Police detective Robert Tonne detailed Garret’s death. Tonne stated that, two cops driving past the scene saw the 6-foot-2, 230-pound King beating Garrett. In Tonne’s report, he noted that King, who had a gun in his right hand, was kicking Garrett in the face and head. When the cops ordered King to drop his gun, he threw the pistol on a nearby car and kicked Garret once more in the face.

The unconscious Garrett, 34, was transported to a hospital where he died. Doctors reported that he had a punctured ear drum, fractured jaw and a skull fracture.

Witnesses who saw Garrett being beaten told police that King pistol-whipped him and repeatedly kicked him. One witness reported that just before Garrett fell unconscious, he pleaded with King to stop, screaming, “I’ll give you the money, Don!”