Drug money is fast money, but it isn’t always easy money. Two Mexican narcos found that out a few days ago, when they were busy unloading an aircraft with 750 kilos of cocaine and authorities came closing in.

DEA agents began tracking an aircraft traveling northbound from the Caribbean Coast of Venezuela around January 27, 2020. The aircraft landed on a remote highway in the Mexican State of Quintana Roo, where it was met by a large number of vehicles and men.

Thanks to the information provided by the DEA, Military Officers with Mexico’s Secretaría de la Defense Nacional (SEDENA) soon arrived near the landing location. Once there, they observed individuals involved in unloading the aircraft’s cargo. It wasn’t long before the smugglers realized they were not working in the privacy of their own office.

A shootout erupted between the traffickers and the SEDENA troops. As bullets were flying all around the area, SEDENA Corporal Emiliano Medina-Ramirez was killed and three other SEDENA officers were injured. 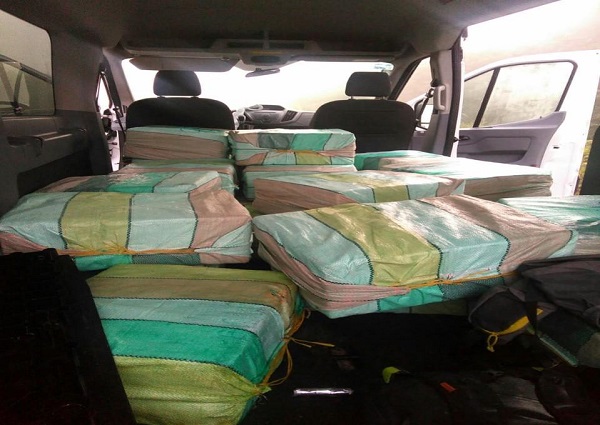 Several of the narcos fled into the nearby jungle hoping to make a getaway. Among them, Mexican narcos German Gomez-Castruita and Benjamin Contreras-Rangel. But the well-trained officers eventually managed to arrest both men and bring them back.

As law enforcement searched the crime scene, they recovered, among other things, approximately 750 kilograms of cocaine, three assault rifles, and a large amount of ammunition (photo above shows cocaine packages in truck, top photo shows .50 cal rifle and ammo).

37-year-old Gomez-Castruita and 36-year-old Contreras-Rangel, both from Mexico, are charged with conspiring to import cocaine into the United States, murder while engaged in a narcotics-importation conspiracy, and various gun crimes. They face life in prison if convicted on all charges.

What seemed like an easy day at work turned into a deadly shootout, a trek through the jungle, and a possible life sentence to be served in an American prison. Though we used to refer to drug money as easy money, we should stop that. It almost never is. One thing it is though? Fast money. And so the game continues.