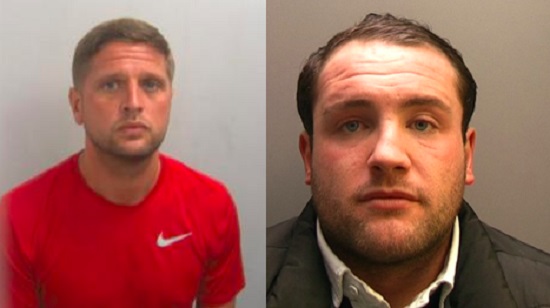 Two English drug dealers have been sentenced to prison yesterday after 20 kilograms of cocaine with a potential street value of over £1.5 million pounds was found in an Essex industrial unit. 34-year-old Daniel Reuter and 32-year-old Kyle Cookson were arrested in July of 2018 after police found the cocaine in their van.

Officers from the joint NCA and Metropolitan Police Service’s Organised Crime Partnership (OCP) pulled their van over outside an industrial unit on Ash Tree Farm Industrial Estate, Roxwell. An initial search of the cargo area at the industrial estate revealed a carrier bag containing envelopes with five 1-kilo blocks inside, packed in with boxes of frozen food. Inside the unit, another 10 kilos were found in a safe. A further 5 kilos were recovered from the van.

Police discovered another van at the unit had been fitted with a purpose-built, steel void, accessed by a removable wooden floor, which was used to conceal drugs. A small amount of cash and two luxury watches were recovered from Reuter’s home address during a separate search.

Reuter and Cookson both pleaded guilty to conspiracy to supply drugs and were sentenced to 9 years and 8 years respectively at Woolwich Crown Court on Friday.