Europol has recently identified a major expansion in the activity of the Hells Angels and other outlaw motorcycle gangs. According to a press release by the European law enforcement agency: “The Hells Angels Motorcycle Club has significantly expanded its presence into Eastern Europe. Over the last couple of years they have spearheaded an extremely rapid drive into South–East Europe, particularly in Turkey and Albania.” 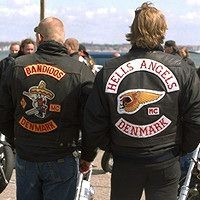 The reason for this expansion can be found in the notorious “Balkan Route”, says Europol. “New alliances between outlaw motorcycle gangs mean that they get the capability and capacity (i.e. infrastructure, relationships, resources and experience) to manage drugs trafficking via South–East Europe using the ‘Balkan Route’, which sees Turkey as an anchor point and major staging area for onward transportation of hard drugs.”

The press release adds: “In establishing its territorial influence in South–East Europe, Hells Angels have built close relationships with local outlaw motorcycle gangs in Albania, Bulgaria and the former Yugoslav Republic of Macedonia, and they have established their own presence in Turkey. Additionally, a large number of former German Bandidos Motorcycle Club members of Turkish origin recently defected to the Hells Angels MC Turkey chapter.”

Furthermore, they list a prospect (which indicates they are on their way to becoming a fully accepted charter) charter in Iceland and “hang around” charters in Lithuania and Latvia. Besides the Hells Angels, the Bandidos and Outlaws also have charters in several European countries.

One of the reasons Europol has published this press release is their fear of a turf war over the South–East European markets. “The establishment of other international outlaw motorcycle gangs in South–East Europe, where Hells Angels are already present, may also lead to violent disputes for superiority,” according to the report.

In the past two decades there have indeed been several wars between outlaw motorcycle gangs. In the United States, a fight between Hells Angels and members of the Mongols MC at Harrah's Casino & Hotel in Laughlin, Nevada left three bikers dead. In Canada, the city of Montreal experienced just how much violence a biker war could produce. A war between the Hells Angels and a biker gang named the Rock Machine raged on for several years and left over a hundred people dead, including several innocent bystanders, while bullets flew and bombs exploded.

In Scandinavia things got very bad as well. There, the “Great Northern Biker War” lasted three years, covered five countries, and involved a variety of motorcycle clubs, including the Hells Angels, Bandidos, and Outlaws. When the clubs finally declared a truce, eleven men had been murdered, there had been 74 attempted murders, and 96 people had been wounded.

Europol has thus decided to issue an alert to these Eastern-European nations because “[they] face an unfamiliar threat and Hells Angels are already using diverse strategies in their attempts to build close relationships with influential people and authorities in the region, as well as systematically trying to build a favorable public image through newspaper articles and TV appearances.”

The European organization calls for law enforcement in these countries to start working closely with their colleagues in Western and Northern Europe and exchange intelligence to “enable national law enforcement agencies to isolate specific outlaw motorcycle gangs from those clubs that are comprised solely of motorcycle enthusiasts.”