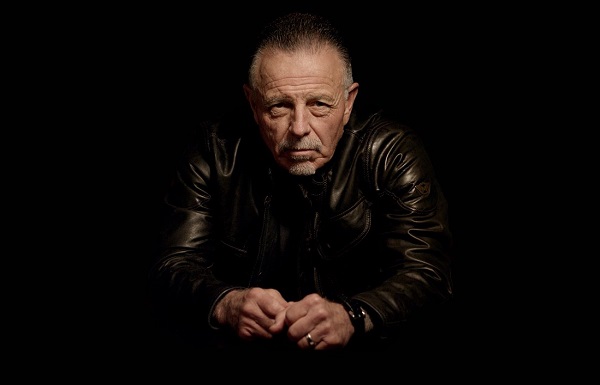 Former Hells Angels leader George Christie (photo above) is touring the country with his critically acclaimed one-man show, Outlaw. After packed performances in Ventura, Santa Barbara and Palm Desert, California, as well as Las Vegas and St. Louis, he is coming to Los Angeles for an August 2 opening.

The production, which chronicles Christie’s nearly 40-year reign as leader of the Los Angeles Hells Angels, then the Ventura Chapter and eventually the entire west coast, will be his first public appearance in Los Angeles since undertaking several events to sign copies of his memoir, “Exile on Front Street: My Life as a Hells Angel…and Beyond.” The book served as the basis for the new theatrical production.

“The book has a lot of inside information about the Hells Angels, but the one-man show is more personal,” Christie said. “I also talk about what’s happened in my life, since I left the club in 2011.”

During his years with the Hells Angels, Christie survived prison, multiple investigations, prosecutions and assassination attempts. Through it all, he considered himself to be a peacemaker in the outlaw biker community. With a reputation firmly established in popular culture, the Hells Angels have developed a modern mythology around themselves that presents as many questions about the group as answers. Are the Hells Angels organized criminals or compassionate givers to charity and the community? What really goes on behind closed club meeting doors?

Christie, a force to be reckoned with, has been involved with the motorcycle culture since 1966. For 40 years he rode with the Hells Angels spending 35 years as a club president. His Hells Angels leadership evolved into Christie becoming an international spokesman for the organization. He became the official voice of the Hells Angels until his departure in 2011.

Through words, images and music, Outlaw explores how the son of poor Greek immigrants in Southern California founded the Ventura chapter of the Hells Angels and rose to become one of the most controversial leaders of the world’s most notorious biker organizations. For more than three decades, Christie was hunted and hated; prosecuted and persecuted, until finally walking away from the Hells Angels in 2011 and starting a new life as a writer, consultant and family man. Outlaw reveals the personal side of a man most people have long considered a criminal, but whose life is so much more complex, surprising and redemptive.

The Hells Angels are the single most notorious motorcycle club in history. They’re also one of the most secretive organizations on the planet. Members are known to take revenge on each other for talking. In the History Channel’s, “Outlaw Chronicles: Hells Angels,” for the first time ever, a Hells Angels member bared all the club’s secrets. Christie came clean and told the world about everything from initiation rites to murder for hire.

As Christie puts it, “some people run away and join the circus. I ran away and joined the Hells Angels.” He famously carried the Olympic torch in the 1984 Los Angeles Games and spent a year in solitary confinement in prison on numerous charges in 2001. In 2011, Christie resigned his presidency of the Ventura charter and left the club. He was immediately excommunicated by his former brothers. He spent another 18 months in prison from 2013-2014 for conspiring to firebomb two Ventura tattoo shops.

Now retired, Christie is a media consultant as an expert on the outlaw lifestyle. He is the author of three books and his History Channel six-part series, Outlaw Chronicles, has led him to his live stage show.

Written and directed by Richard La Plante, Outlaw received standing ovations during its world premiere run in Southern California. “I think most people who had a problem with George in the past, realize that it was a long time ago,” La Plante said. “George has put the controversies behind him. That’s what the show is about.”

“I wasn’t sure what to expect, especially in Ventura, where I was controversial for many years,” Christie said. “I tried to keep things peaceful when I ran the Ventura chapter of the Hells Angels, but a lot of people, especially in the local business community and law enforcement didn’t like us. I was pleasantly surprised to receive such a positive reception in my old stomping ground.”

Christie isn’t the first former Hells Angel to go into showbiz after a long and notorious career as an outlaw biker. Fellow Angel Chuck Zito has starred in various television shows (Oz, Sons of Anarchy) and movies after leaving the club’s New York chapter.

Outlaw runs August 2 through August 24 with performances on Thursdays and Sundays and later in the run on Fridays at 8 p.m. Tickets are $25 for all performances. Whitefire Theatre is located at 13500 Ventura Blvd. in Sherman Oaks, CA 91423. For reservations, call (213) 713-9149 or go to www.Clagoproductions.com and for more information please visit www.GeorgeChristieOutlaw.com. Visit Outlaw on facebook: https://www.facebook.com/pg/GeorgetheOutlaw. Follow us on twitter: @georgeFPC and instagram: @outlawtheshow.