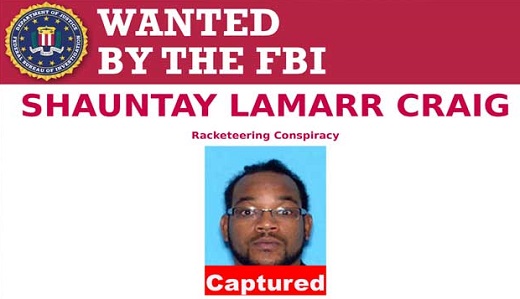 The FBI arrested Shauntay Lamarr Craig, an alleged leader of the violent Gangster Disciples gang, in New Orleans on Sunday. The 38-year-old crime boss was hit with federal racketeering charges along with 49 other gang members on April 28, 2016, but managed to evade arrest.

Craig was wanted for his alleged involvement in criminal activities related to his alleged role as a “board member,” a position of national leadership, within the Gangster Disciples. Since 2009, Craig is reported to have held a high rank in the organization controlling gang activity nationwide. He also allegedly acted as a supply source for many members of the gang dealing in heroin, cocaine, methamphetamine, marijuana, and oxycodone. Craig was also allegedly responsible for ordering members of the organization to carry out violent retaliatory acts.

The Gangster Disciples, as a whole, are believed to be responsible for numerous murders and robberies and are alleged to have engaged in extortion plots and narcotics trafficking throughout the United States.

“The FBI and its many law enforcement partners have undertaken the arduous task of dismantling this dangerous and violent national street gang known as the Gangster Disciples,” said George Couch, acting special agent in charge of the FBI’s Atlanta Division. “With an extensive series of federal indictments and ensuing arrests, we feel that we have made significant progress toward this goal. Taking down the leadership of such an organization is, however, imperative and the arrest of Shauntay Craig brings us even closer to our objectives.”