What a weird world we live in. A world in which we have celebrities who are famous for no apparent reason, at least not a reason anyone can name, they simply are famous. And those that did make it big, have a strong urge to be something else. In an earlier article I pointed out how many actors that starred in The Sopranos ended up being involved in real crimes. And the gangsters themselves obviously love hanging out with these celebrities. The grass is always greener on the other side.

Nowhere is this more visible than in the hip hop & rap scene. For decades crime and rap have been intertwined, entertaining an audience of millions with music and lyrics that paint a vivid picture of the violent hoods across the United States.

A lot of people fail to realize, though, that most rappers either never were involved in crime or only in a minor way. If they were making millions selling dope, why would they even make a career switch? It has become a selling point for them. Embellish or even Invent a violent past and you sell more records. Even if your raps aren’t as good as those of your competition. Image is everything, and that was never more true than in the rap scene.

In the past decade we even saw real gangsters get involved with the music business. Rap label Murder Inc. felt it was smart to bring crime boss Kenneth “Supreme” McGriff into the fold and let him participate in their multi-million dollar business which sold records worldwide. Things didn’t end well, when the real gangster attracted the attention of the police and label executives had to stand trial on money laundering charges. Though they were acquitted, it was a reminder to the wannabe gangsters that there is more to being a gangster than just looking tough and living the good life. There is a lot of stress and that life either ends in prison or the cemetery.

That’s probably one of the reasons why the following successful gangsters were risking time in the spotlight trying to launch a rap career all the while getting rich as they were dealing multiple kilos of cocaine on the streets of Kansas City.

The end of June saw the culmination of Operation Blockbuster in which the DEA dismantled a drug-trafficking organization that smuggled hundreds of kilograms of cocaine worth millions of dollars from Mexico to distribute in the Kansas City metropolitan area. A total of thirty-one defendants were indicted. The leader of the organization, and the man with all the right connections, was Alejandro Corredor (36) a citizen of Colombia residing in Kansas City. Corredor had an in with a Mexican drug cartel and would order loads specifically for the Kansas City area. A normal load of cocaine would be from 20 to 50 kilograms, which was smuggled in vehicles driven to Kansas City from Mexico. After Corredor sold the cocaine and collected the money, he packaged the cash in bundles that were hidden in false compartments of various vehicles. The vehicles would then deliver the money to the El Paso, Texas area, where it would be transported across the border into Mexico.

Now you are probably wondering where the rap angle that I mentioned earlier comes from. Well, two of Corredor’s clients were Dandrae “Bird” Jones (35, photo right) and Edward “Black Walt” Jefferson (39) both of Kansas City.

Besides being one of Corredor’s biggest distributors in the Kansas City area, Jones was a local rap artist and owner of Block Life Entertainment. “Corredor invested from $200,000 to 250,000 in Block Life Entertainment, and allowed Jones to live rent-free in one of his residential properties. Jefferson was also a rap artist and one of Corredor’s distributors,” according to the DEA.

As Jones was enjoying his successful relationship with Corredor he did not keep a low profile, and his boss dit not mind. During those years Jones and his gang made a lot of noise promoting their music and label. A lot of it can still be found online. YouTube has many music videos (see below) of the cocaine hustler turned rapper and his entourage of intimidating friends and sexy female companions. The label’s MySpace page not only shows promotional photos but also contains photos of the gang's luxury automobiles.

For those of us that are used to secretive gangsters who hide behind a newspaper or their hands as they walk into court, this large public cache of videos and photos is mind blowing. Here are two successful criminals dealing in multiple kilos of cocaine who are putting out raps in which they celebrate exactly that gangster lifestyle.

Jones and Jefferson were among the last to be convicted in this case. Other members of their group had already been found guilty of various charges. One of that group, Dennis “Westcrook” Westbrook, was also a member of the Block Life rap group and can be seen on the cover of the group’s album together with “Bird” Jones. Jones and Jefferson face a mandatory minimum sentence of 10 years in federal prison without parole, up to life in federal prison without parole.

The only question left to ask is: Will they now finally hit the big leagues with their rap career? 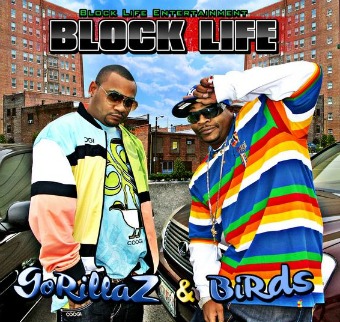