Gangbanger or Mafioso? You be the judge. He may not look like it, but Robert Sasso, pictured above, is a Gambino crime family associate whose father and grandfather were in “the life” as well. And while he may not have learned how to dress like a mobster, he is alleged to be very familiar with the Mafia’s violent ways of doing business.

The 33-year-old Gambino wiseguy allegedly shot a 39-year-old man four times on a Whitestone shoreline near Boulevard St. in Queens at 2 a.m. The victim was taken to New York Hospital Queens, where he was listed in critical condition, the New York Daily News reported.

CBS 2 News New York reports that, “the victim was taken out to a jetty, where he was shot. He was then able to call 911 and identify his shooter.” (Photo above shows crime scene.) 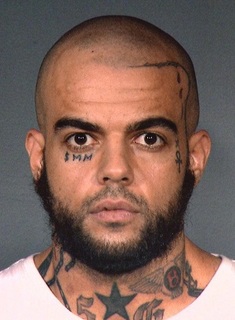 In the old days, a mob hit man made sure his victim was dead. The victim in turn made sure that if and when he did survive, he would not talk to authorities. Things were a lot simpler back then.

Kidding aside, Sasso (right) won’t get a prize for secrecy anytime soon. With his face tattoos he would fit in better with South American gang MS-13 than with any of the five New York Mafia families. Yet, here he is, a Gambino family associate. Allegedly.

His father, also named Robert, is an alleged organized crime figure who did time for gun trafficking. Sasso’s grandfather, named Robert as well, was President of Local 282 of the International Brotherhood of Teamsters and was also heavily connected to the Gambinos.

According to information provided by former Gambino underboss Salvatore “Sammy the Bull” Gravano Sasso “gave sweetheart contracts to mob-controlled companies and that he shared in payoffs to mobsters made by contractors for labor peace.”

Sasso was forced to step down as President and was later convicted of union racketeering. He spent several years in prison until his release in 1997. That same year, his son was also released from prison.

And now, the youngest of these Robert Sassos is wanted for murder.

It’s not the first time police are eyeing Sasso as a murder suspect. Last year, authorities accused him of ordering a hit on a construction supervisor who fired him. He was questioned but managed to dodge the charges. And there are other cases where police suspect Sasso’s involvement, but are unable to take him to trial.

With a face that looks like a bulletin board for prison gangs it won’t be long before Sasso finally finds himself in actual prison again. For how long depends on whether authorities can make the charges stick this time.