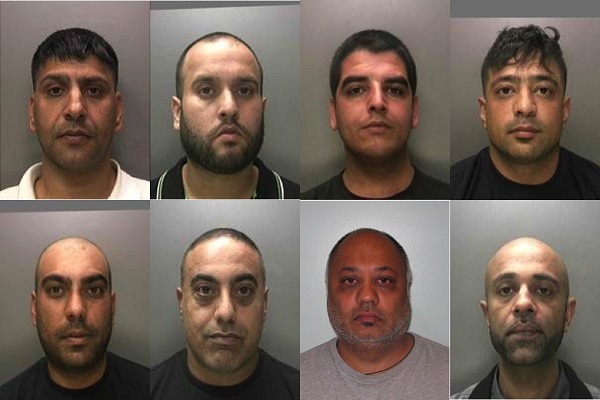 Eight heroin traffickers from Birmingham in the United Kingdom were jailed for a combined 139 years yesterday following a National Crime Agency (NCA) investigation. The group conspired to import heroin worth up to £10 million from Pakistan to Great Britain inside industrial equipment.

The crew’s ringleaders were 38-year-old Ameran Zeb Khan, 36-year-old Mohammed Ali, and 32-year-old Sajid Hussain. Each of them received a sentence of 22 years behind bars. Hussain was sentenced to another 9 months for another offence.

The men organized two container shipments from Lahore, via Karachi, to the London Gateway Port in February and July 2014. The second shipment was intercepted by Border Force officers who cut open the container’s cargo of industrial lathes to find 165 kilograms of heroin.

Officers removed the drugs and reassembled the laths and sent them on to their delivery destination at an industrial unit in Sandwell, West Midlands, where they were met by 36-year-old Omar Isa and 35-year-old Imran Arif.

The meeting costed both men as Isa was sentenced to 15 and a half years in prison, while Arif was imprisoned for 10 years.

49-year-old Mohammed Ashaf Khan, who handled logistics for the conspiracy, was imprisoned for 17 and a half years while 52-year-old Rajesh Patel, who used his business to provide paperwork for the shipments, was jailed for 15 and a half years.

38-year-old Zulfgar Munsaf, who passed on the bosses’ instructions to the ground troops and was the only one of the group to plead guilty to avoid a trial, was given 14 years.

The heroin seized by Border Force, which the group planned to sell on in bulk, had a purity of 58 per cent and was worth £5 million uncut. The NCA believe a similar quantity of heroin was contained in an earlier shipment for which they have found records, meaning the conspiracy could have earned the group up to £10 million.

After cutting the 165 kilograms of heroin to 25 percent purity, street level gangs could have made up to 2m street deals, generating revenue of up to £19,140,000. If the first shipment contained a similar quantity of heroin, the total street value would double accordingly.

“This was a determined and capable criminal group,” Paul Risby, branch commander at the NCA, told reporters. “They had connections to heroin suppliers and used legitimate business paperwork to provide cover for their activity.”