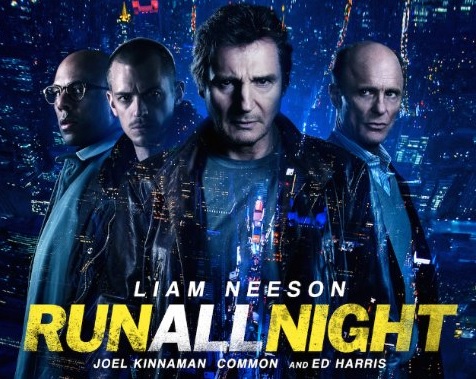 A gangster movie starring Liam Neeson as a notorious hitman for New York’s Irish mob? Yep, that’s what we at Gangsters Inc. call must-see! In the film Run All Night, Neeson plays mobster Jimmy Conlon, an alcoholic whose own son does not want to see him anymore due to his violent profession.

He spends his time hanging around at a social club run by the Irish mob, usually asleep, with empty bottles of Jack Daniels in front of him. He is ridiculed by his fellow gangsters and Danny, the son of crime boss Shawn Maguire played by Ed Harris, does not understand why his father keeps him around.

Viewers kind of have an idea, of course. Even though that idea is mostly based on an entirely different set of movies.

Ed Harris, meanwhile, is no stranger to playing Irish gangsters, having done a great job in the movies A History of Violence and State of Grace. That last movie, also starred Sean Penn, and was based on the true story of The Westies, the Irish mob operating out of Manhattan’s Hell’s Kitchen.

Though Run All Night is purely fictional, it does refer to several real life mobsters. Characters claim Gambino crime family mobster Roy DeMeo was behind a certain murder and in another scene Jimmy Conlon remembers meeting Mickey Featherstone at a Manhattan restaurant.

Featherstone was a hitman for The Westies who eventually testified against his former boss Jimmy Coonan and disappeared into the Witness Protection Program.

Check out the trailer:

More gangsters and mob movies? Check out our Showbiz section.