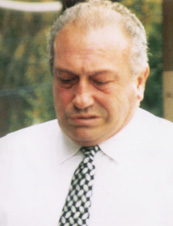 The Genovese Crime Family is, and has been for decades, the most secretive and well-run Mafia family in New York. When the family's boss Vincent "Chin" Gigante (photo on the right) died in December of 2005 speculation began as to who would succeed him. Many names were thrown around: Tino Fiumara, Liborio "Barney" Bellomo, but the name of the man who authorities now say has been the Genovese boss since Gigante's death was not mentioned. That man is Daniel "The Lion" Leo. Mob expert Jerry Capeci broke the news in November 2006, in a way, it signaled it wouldn't be long until Leo would end up in prison.

During the 1970s Daniel Leo was a member of the violent East Harlem Purple Gang. The Purple Gang was comprised of 127 drug dealers, several of which went on to become prominent members of New York mob families. In 1980 Leo suffered his first arrest when he was hit with a criminal contempt indictment for refusing to testify before a grand jury that was investigating loansharking, drug trafficking, and four murders. After that things went quiet. But Leo was not sitting still, he was making a name for himself within the Genovese Crime Family. By the time Vincent Gigante's leadership came to an end, he was one of the most valued members, and after Gigante's death, became the boss.

Being the successor to one of the most mysterious bosses in the history of the American Mafia it was all the more surprising when Leo was arrested on extortion and federal loan sharking charges on May 30, 2007. Starting in 2002 he had made three $50,000 high-interest loans to a livery car businessman. When the man had trouble making his payments, he was threatened by Genovese enforcer Charles Salzano. Two brothers who ran an illegal gambling operation were also extorted and threatened by Leo's underlings. On October 31, 2007 Daniel Leo pleaded guilty to extortion charges, and will pay back the $75,000 he made from the extortion. On February 28, 2008 he was sentenced to five years in prison. Leo is 66 years old, and prison will not be kind to him. If he makes it out, it will be interesting if he will continue his life of crime. History has proven though, that Mafiosi are not bothered by old age.

Comment by Rick Apple on June 18, 2011 at 8:36pm
I've always always thought of the Gambinos as being the biggest and most polarized families
Busy group of people.

Comment by Rick Apple on June 18, 2011 at 9:31pm
I hope Leo has peace with God. He comes from am era we haven't a clue about. And no one should try and judge him. I believe the guys he serves his time with will assure his well being as well