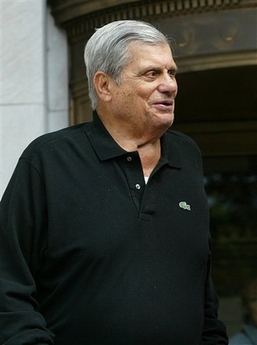 Matthew "Matty the Horse" Ianniello isn’t your average mobster. He is an acting boss of the Genovese Crime Family, who was on the ruling committee of the Family after official boss Vincent “The Chin” Gigante was convicted. According to the FBI Matty had the most important vote in the committee, they ranked him as acting boss. He has had a long and successful mob career. And has been an important Genovese member since the 70s. He is a cold blooded Mafioso who also was successful in the businessworld. He is the prototype of the shrewd gangster who despite his old age, wasn’t ready to retire.

Matthew Ianniello was born in 1920. He grew up in the Italian neighborhoods of New York. In 1942, like so many Italian Americans, he joined the army, to fight in the second world war. When he came back home, Matty was a decorated war veteran and decided he wanted to start a career in organized crime. Back then he was already known by his nickname “Matty The Horse.” Like so many wiseguys he got his nickname as a young kid and kept it until today. Matty was a gifted baseball player with a hard swing. During one of the many games at a neighborhood field things got out of control. The pitcher of the opposite team was annoying Matty’s team mate who was about to bat. To make things worse he threw the ball as hard as he could in the face of the batter. A fight errupted in which Matty knocked down the pitcher, who was at least three years older and two heads taller than himself. After this his teammates and several local mobsters said: “That boy is as strong as a horse.” The nickname “Matty The Horse” was born. Seventy years later the nickname has become famous far outside New York.

Ianniello quietly climbed the underworld ladder. He joined the Mafia Family of Frank “The Prime Minister” Costello. A few years later a power struggle broke out that would carry on for ten years. After Costello Vito Genovese grabbed power. After him Thomas Eboli became head of the ruling committee. It didn’t matter to Matty, he was now a made guy, and active in the union. He was also active in typical mob crimes as extortion and illegal gambling. But slowly he got involved in another business, one he himself controlled, a web of sex shops.

At the beginning of the 1970s Matty, now promoted to caporegime, controlled nearly every sex shop and porno club on Times Square. Officially he still had a respectable job with the union. It was a good time to be a Mafioso, before RICO, and before the FBI had started its witch hunt on the five Families. FBI director J. Edgar Hoover denied the existence of of an organized Italian crime syndicate. Hoover was head of the FBI from 1924 until his death in 1972. In those fifty years he was considered one of the most powerful men in the US. Why would such a powerful and intelligent man ignore the clear signals of the mob’s existence for so long? According to rumors Hoover was having a homosexual relationship with an FBI underling, and the mob had obtained evidence of his homosexuality. The mob allegedly had photos of Hoover in bed with another man. For years mob leaders blackmailed Hoover with these photos in order to keep their organizations out of the long arm of the Feds. It apparantly worked, it wasn’t until a few years after Hoover’s death that the FBI increased its pressure on organized crime.

It were easy times for Matty in the beginning of the 70s. In 1972 Matty’s brother Bobby opened a restaurant on Mulberry Street in New York’s Little Italy. The restaurant, Umberto’s Clam House, would become a tourist attraction for those interested in the American Mafia. Matty loaned his brother money to start the restaurant, and he himself would be a silent partner. On April 7 the name Umberto’s would become part of a legend. Around 4am, after a night out celebrating his birthday, Joe Gallo and company left the Copa Cabana club, on their way to disaster.

“Crazy” Joe Gallo was already a legend back then. A Colombo capo he was known as the man who had fought the leadership of his own Family ten years earlier. Together with his two brothers Larry and Albert, and his ally Carmine “The Snake” Persico (current boss of the Colombo Family) he was responsible for overthrowing Joe Profaci as boss of the Colombos. In 1961 Crazy Joe was arrested and sentenced to ten years in prison. He had only been out for a year that night in 1972. But already he was rumored to be involved in the shooting of Profaci’s successor, Joe Colombo, in June 1971.

That April 7, 1972 morning most places were closed, when Gallo and his entourage, among them his bodyguard Peter “The Greek” Diapoulos, were hungry and looking for a restaurant. Umberto’s hadn’t been open that long, and none of them had ever eaten there. When he entered the restaurant Gallo greeted Matty The Horse, whom he knew to be a Genovese capo. But he wasn’t aware that Matty’s brother was the owner of the restaurant, nor that Matty was a silent partner. Not long after the group sat down for dinner three armed men stormed into the restaurant. They were gunning for Joe Gallo and opened fire. Because he was standing and walking away from the table he protected the group, among them his sister and stepdaughter, from getting shot. Joe Gallo was hit several times, collapsed and dies. Pete the Greek tried to shoot the hitmen but got hit in the buttocks. When he got back up after seeing the shooters drive off in a car, he confronted Matty, who was in the kitchen at the time of the hit. Matty convinces Pete the Greek that he had nothing to do with the hit, and that he is part owner of the restaurant. The Greek realises Gallo had a lot more enemies and takes Matty’s word. To this day Umberto’s is a tourist attraction, the restaurant has moved from its original location though.

The next ten years everything seemed to be going Ianniello’s way. Gigante had become boss of the Genovese Family at the start of the 1980s, which was great for Matty. Gigante was very happy with the money Matty sent his way. And Matty was very happy with the freedom he had to handle his business. Other mob families were becoming active in the porno world by then, but there was enough money for everybody. Matty also continued his normal mob business for which he is convicted and on February 15, 1986 sentenced to six years in prison and a fine of $2 million.

When he is released from prison not much had changed within the Genovese Family. While other Families are having problems with rats, the Genoveses run a tight ship. Boss Vincent Gigante is very secretive and his capos act the same. Gigante was known for his crazy act. He walked around Greenwich Village in his bathrobe mumbling to himself. This act had kept him out of prison for decades. But in 1997 he is finally convicted, and in 2003 he admitted his crazy behaviour was indeed an act. Matty also ran into some trouble. In 1996 his name popped up in several indictments against the Genovese Family. But the FBI had insufficient evidence after several witnesses decided not to testify.

With Gigante in prison there was an opening at the top of the crime family. But The Chin keeps control, and gives his orders from prison. After several acting bosses are arrested Gigante installs a committee consiting of several powerful capos. It is their job to take over some of Gigante’s duties and to give out and enforce his orders. Ianniello has a place on that committee. And when several other committee members are arrested, Matty becomes the man whose vote counts the most.

In the beginning of 2005 the FBI says Ianniello (84) is the acting boss. Matty is still going strong, despite his old age. But on July 28, 2005 at 6 o’ clock in the morning there is a loud knock on Matty’s door. It’s the FBI with a search warrant and a warrant for his arrest. Matty knows what time it is, he’s been in “the life” long enough. Matty still has a full head of white hair, he insists he is allowed to comb it, and put on a new shirt, before being led away. He knows there will be dozens of reporters waiting for him. His motto always has been: “You never get a second chance to make a first impression.”

By 2006 Ianniello’s world came crashing down. He had already been indicted in New York, and in June 2006 he is also indicted in Connecticut involving the garbage industry. Eventually Matty pleaded guilty to both indictments. For the first (New York) indictment Matty faces up to two years in prison. For the Connecticut plea he faces 24 to 30 months in prison. The chance that Matty the Horse will ever be a free man again are slim to none, yet he keeps his mouth shut and honors omerta, the code of silence. His friend Vincent Gigante already passed away in prison. Gigante wasn’t the last real gangster, Matthew Ianniello is the last real gangster.

UPDATE: "Matthew "Matty The Horse" Ianniello, one of the last of the old time New York mobsters, has died", reported Anthony M. DeStefano for Newsday. According to the article, Ianniello died August 15 at his home in Old Westbury at the age of 92. His medical records showed he had heart surgery in 2000 and had a pacemaker installed.

Pretty good article,but Larry,Joey,and their crew never overthrew Profaci.He died from natural causes and Joe Magliocco took over The Family which went to Joe Colombo after The Fat Man's passing.I'm no expert or near as schooled as a lot of readers,but have always liked Joe Gallo,one of my personal favorite mobsters.Recently found the movie "Crazy Joe" on Youtube and recommend watching it as it's based on his life although names have been changed in it as it was made in '74 and a lot of the players were still very much alive then.

It was a Kamikaze hit and did endanger the lives of Joey's family and everyone else that early morning in the restaurant,but I think made more out of desperation than anything else to finally kill Joey as he was a major threat to the other Families and he himself was fearless and would do anything but I personally don't think he would have put women and children in harm's way either.That's pretty cool you guys were friends,Gaspar.I would have liked to have met Joey myself!.

Hi Dale, Joey was a complex guy,he was only out of the joint a year or so when he was killed, truth of the matter is he was tired of the life he lived, when in prison he started to read quite a bit and started to hang out with legit people.