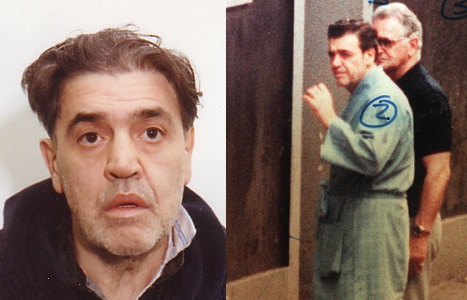 Vincent “Chin” Gigante was one of the weirdest and oddest Mafia bosses in American history. Famous for wandering through the streets in his bathrobe, mumbling and talking to himself, for over 30 years, he even fooled medical professionals into thinking he had lost his mind. But on the streets, his friends and enemies knew the truth: That he was the most powerful gangster in the United States.

Vincent Gigante (right) was born on March 29, 1928, in New York and grew up in Greenwich Village, in Lower Manhattan. He had a good start in life with two loving parents, completing 9th grade and attending a vocational textile high school after that. But something was missing. It was not the job for him. He quit school and got a variety of odd jobs.

To blow off steam, in 1946, he began boxing. His fight career was pretty solid, winning 23 of his 24 fights, only one by knockout. Whether he was a great boxer or whether he got some help from mobbed up boxing promoters is not that known, but judging from the crowd he would surround himself with in later years it would not come as a surprise.

While working those odd jobs in between boxing fights, Gigante became associated with a crew in the family once headed by Charles “Lucky” Luciano. He showed he was capable of controlled violence and not afraid for anyone. Mob leader Vito Genovese took an immediate liking to him. Gigante became one of his most trusted and loyal soldiers, his go-to guy for serious business.

Serious as in the 1957 clandestine hit on an official Mafia boss, Frank Costello, the man in charge of Gigante’s family.

Gigante spent hours every day target shooting in a secure Greenwich Village basement to practice for the hit. Despite all this preparation things still didn’t go as planned. As Costello (left) entered the hotel lobby where he was staying, Gigante lay in waiting. When the boss passed him by, Gigante yelled out, “This is for you, Frank!” Costello turned his head the exact moment Gigante fired a bullet his way. The shot grazed Costello’s head and knocked him to the floor. Gigante thought he’d done his job and fled the scene in a getaway car.

Costello was only wounded and survived the hit. But the result was still satisfactory for Vito Genovese, the man who ordered it. He wanted the power and needed Costello out of the way. After the botched hit, Costello decided to step down and retire. Genovese became the new boss of the family and Gigante was on the fast track to becoming a bigtime gangster.

After starting out as a soldier in the crew of capo Thomas Eboli, by the 1970s he was a capo himself. A decade later, he moved up to the rank of consigliere, advising boss Anthony “Fat Tony” Salerno on mob business.

When Salerno suffered a stroke, he retired to his farm to recuperate for six months. When he returned it is alleged Gigante was appointed as official boss while Salerno would serve as a front to fool law enforcement agencies. He would continue to do so until he was convicted in the Commission Trial targeting all the leaders of the five New York families. He died in prison in 1992.

With Salerno’s conviction and death, Gigante was forced out into the open. Luckily he had been working on a routine that would help conceal his true identity in full view of the public and the glaring eyes of the FBI. Since the 1960s, Gigante had been feigning a mental illness, checking himself in and out of hospitals. When, in 1970, he stood trial for bribing the police force of Old Tappan, New Jersey, several psychiatrists testified in court that Gigante was a “paranoid schizophrenic, suffering from hallucinations.” The bribery charges were subsequently dropped.

The success of his crazy act encouraged Gigante to use his mental frailty as a device to confuse, fool, and allude the law. He booked himself into St. Vincent’s Psychiatric Hospital in Harrison, Westchester County, 22 times between 1969 and 1990. As he grew older, he became a familiar sight, wandering around the streets of Greenwich Village, a shabby, demented old man. Usually dressed in striped pajamas, slippers, and a royal blue robe, grinning and talking to himself.

“God is my lawyer,” he told a psychiatrist. “He will defend me.”

His brother, reverend Louis Gigante, told reporters on one occasion, “Vincent is a paranoid schizophrenic. He hallucinates. He’s been that way since 1968 or 1969. Look at the medication he takes each day.” Louis Gigante showed a list that he said was his brother’s daily intake: five milligrams of Valium; 100 milligrams of Thorazine; and 30 milligrams of Dalmare.

When told that her son was being indicted for being the boss of the biggest, most powerful Cosa Nostra family in America, his then 88-year-old mother shouted, “Vincenzo? He is the boss of the toilet!”

Still, some people weren’t so sure his crazy act was worth it. Anthony Salerno said it best one time when he was caught on an FBI tape. “If ‘Chin' gets pinched, all those years in that fuckin’ asylum would be for nothing.”

At first, Gigante’s acting seemed to pay off. The feds just couldn't convict him. When they arrested him in 1990 he was charged with 41 different racketeering and conspiracy charges, yet he would not be convicted until 1997.

As he was being closely monitored by the FBI and prison guards, Gigante sometimes stopped acting. He apparently looked after himself in prison. He made his own bed, shadowboxed in his cell, and despite his advancing years, commanded respect from the other inmates. During one conversation with a prison guard, he was asked if other inmates were harassing him. “Gigante looked at me,” the guard said, “and replied, ‘Nobody fucks with me.’”

Not a smart thing to say, especially not when you’re crazy act is working like a charm. However, it wasn't Gigante's shadowboxing or normal behavior that did him in. Several turncoat mobsters, among which Gambino family underboss Salvatore Gravano, testified that Gigante wasn't crazy and that he in fact was the boss of the Genovese crime family. After that, Gigante was found guilty and convicted.

Locked up, away from his relatives and mob family, Gigante remained in firm control of his criminal empire. This became clear on January 23, 2002, when Gigante's son Andrew and six others were indicted. Since his conviction, Gigante dropped the crazy man act and used his son and others to carry out his directives. In April of 2003, he finally pleaded guilty to faking mental incapacity to obstruct justice. As a result, three years were added to his twelve year sentence.

It was Gigante’s final appearance. On December 19, 2005, the 77-year-old mob boss died in the U.S. Medical Center in Springfield, Mo. According to Gigante’s son Vincent Esposito, his condition was worsening, but this was ignored by Missouri prison officials. Esposito visited his father on October 16 and 17, and found him asleep or unconscious most of the time. “When he was awake, he remained slumped in his wheelchair and appeared disoriented and confused as to his surroundings” Esposito said. “In addition, his breathing was labored and he was drooling. His lower body appeared to be grossly swollen, and he had involuntary tremors of his lips and hands.”

Authorities apparently were unsure whether Gigante’s condition was real or whether the old fox was fooling them one last time.