Eleven members and associates of the Genovese crime family were charged with racketeering charges for allegedly reaping millions of dollars in criminal profits in New Jersey through loansharking, unlicensed check cashing, gambling and money laundering, including laundering of proceeds from narcotics trafficking. Using advanced techniques the mob crew did its best to stay one step ahead of the law.

Among the eleven defendants, two stand out as actual members of the New York-based Genovese family. Charles “Chuckie” Tuzzo (80) of Bayside, New York, is a “capo” or captain in the organization, and Vito Alberti (55) of New Providence, New Jersey, is a Genovese soldier. Both men are alleged to be the ultimate power behind the New Jersey crew charged in this indictment.

Tuzzo is a capo with strong links to the family’s leadership. In 2002, he was among 45 Genovese mobsters accused of infiltrating the waterfront in the New York region and in Miami, financial fraud, extortion, stock fraud and money laundering. Heading the indictment were boss Vincent Gigante and his son Andrew. Tuzzo pleaded guilty and was released from prison in February of 2006.

Now, the 80-year-old wiseguy can prepare himself for another round in court. The charges Tuzzo and the others are facing stem from “Operation Fistful,” and carry consecutive sentences of ten to twenty years in prison for each charge, including lengthy periods of parole ineligibility. 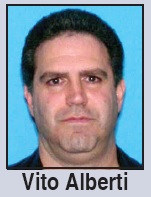 While the elderly Tuzzo and his trusted soldier Alberti supervised the crew, its street work was done by associates like 56-year-old Domenick Pucillo, who ran licensed and unlicensed check-cashing businesses in Newark through which the illicit revenue allegedly was collected and laundered. A very sophisticated scheme that proved very profitable.

According to prosecutors, the Genovese mobster used his check-cashing businesses for a massive loansharking operation. He runs several businesses, but the main one is Tri-State Check Cashing, Inc., with headquarters at 17 Avenue A in Newark. He allegedly used cash and credit lines extended to his business to loan money “on the street” at usurious rates. He made loans at one to three “points.” A point equals 1% interest, due weekly, so one point equates to 52% annual interest, two points to 104% annual interest, and three points to 156% annual interest. New Jersey law defines criminal usury as loaning money to an individual at an annual interest rate exceeding 30%, and makes it a second-degree crime if the rate exceeds 50% per year.

Over a two-year period, Pucillo had approximately $3 million in usurious loans on the street and collected around $1.3 million in interest per year. It is alleged that Genovese associate Robert “Bobby Spags” Spagnola (67) partnered with Pucillo in the loansharking business and received a commission of one point on each loan he secured for Pucillo. In addition, Pucillo shared the loansharking proceeds up the Genovese chain of command to Alberti and Tuzzo.

Victims were required to pay interest on a weekly basis. The scheme was designed so that, when the victims made loan payments by check, it appeared that they were cashing checks in the ordinary course of Pucillo’s check-cashing business. When they took out loans, victims were required to sign partially completed checks, which Pucillo and his co-defendants could complete and cash through the check-cashing business to collect weekly interest or payments of principal. Victims also could pay in cash.

In addition to Tri-State Check Cashing and his other licensed check-cashing businesses, Pucillo allegedly financed an unlicensed, illegal check-cashing operation with partners and Genovese associates Abel J. Rodrigues (52) and Manuel Rodriguez (49). This scheme operated out of Portucale Restaurant & Bar at 129 Elm Street in Newark, also known as Viriato Corp. – which is owned by Abel Rodrigues – under the guise that Rodrigues was legally allowed to cash checks as Pucillo’s agent. In reality, this arrangement is illegal, and the defendants allegedly used it to enable clients to launder money and evade taxes. It is alleged that over a four-year period they illegally cashed over $400 million in checks through Portucale Restaurant and collected over $9 million in fees. Many customers cashed checks at Portucale Restaurant to launder money, hide income or obtain cash for “under-the-table” payrolls because Abel Rodrigues allegedly did not ask for any identification and would not file proper “currency transaction reports,” or CTRs, for any check or combination of checks exceeding $10,000, as required by federal law.

In return for cashing checks for over $10,000 without scrutiny, customers paid fees of up to 3% percent per check, which exceeds the limit of 2.21% permitted under New Jersey law. Abel Rodrigues allegedly received 1% on each check, and the remainder went to Pucillo. It is alleged that Pucillo in turn provided one-quarter of his fees to Manuel Rodriguez, who shared a portion of his fees up the chain to Alberti, Tuzzo and the Genovese crime family.

In January 2012, Pucillo acquired a check-cashing business in Hialeah, Florida, called I&T Financial Services. It is alleged that he subsequently entered into an agreement to launder and transfer drug money from New York and New Jersey to Florida. The drug traffickers allegedly would deliver cash at Tri-State Check Cashing in Newark. The money then was wired under the fictitious company name “Gold Shiny” to Florida, where it was laundered through I&T Financial’s business accounts and was received by the client, whose identity remained concealed. Pucillo allegedly laundered and transferred $666,000 in this manner, collecting $22,500 in fees on the transactions.

If proven in court and thus true, these mobsters ran an ingenious and very profitable racket. One we came to expect from the Genovese crime family, which is considered the most powerful and well-run mob family in the United States.

The indictment also shows that, for some, it is not just a family in name only, some are just following in the footsteps of a close relative. Like 37-year-old Vincent P. Coppola, son of imprisoned Genovese capo Michael Coppola, who allegedly was part of a network of Genovese associates who ran a multi-million dollar illegal sports gambling enterprise in New Jersey that utilized an off-shore “wire room” in Costa Rica to process bets.

Coppola allegedly was an “agent” who managed sub-agents or package holders, each of whom had a “package” of bettors under him. Agents decide which bettors can open accounts and gamble using the enterprise’s website and toll-free phone number. They also dictate how much a bettor can gamble per game and per week, and monitor the action and balances of the packages they oversee. Eventually, Coppola allegedly gave his sub-agents more complete control of the bettors in their packages. In a single year, in 2011, Coppola’s sub-agents allegedly handled more than $1.7 million in bets, and Coppola and the Genovese crime family – through Alberti and Tuzzo – made more than $400,000 in profits.

Off-shore gambling has become a favorite operation among mobsters. A law enforcement source explained why to Gangsters Inc., “The mob is always learning from previous cases and investigations against them. How they got caught, what techniques were used, what informants were used, etc. Some of their lawyers even educate them on the various investigative techniques used and the rule of law. As a result, they are constantly morphing in order to try to outsmart law enforcement. There is so much money in bookmaking which is what it is all about for them. Protecting their “bread and butter” is their big priority. The mob, through these new gambling methods, can now give you the opportunity to gamble in the comfort of your own home. Also, by having you call a toll free telephone number to place bets in Costa Rica, it insures that law enforcement cannot raid the Mafia’s local “wire rooms”. It’s a game of cat and mouse, or in this case, cops and robbers. They are getting smarter, but so is law enforcement.”

Sentiments echoed by Acting Attorney General Hoffman, who said, “We charge that this crew of the Genovese crime family was up to many of the Mafia’s old tricks in New Jersey, including loansharking and illegal gambling, to the tune of millions of dollars. History teaches us that as long as demand exists for illegal loans, illicit gambling, drugs, and other black-market goods and services, organized crime is going to turn a profit by preying on society. Our message to the Mafia is that as long as they do, we’re going to be here to send them to prison.”