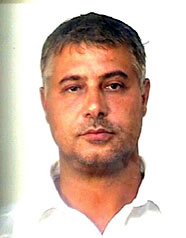 Federal authorities already suspected Fusco, who is an Italian citizen, might be hiding in Italy. In their man hunt, the FBI asked for the help and assistance of Interpol and the Italian police. After staking out several possible hide outs and shadowing friends and relatives of the fugitive, Italian police managed to locate him in Sorrento, a small coastal city in the Campania region approximately 30 miles from Naples. Fusco (right) is originally from this area and had no trouble blending in. When police arrested Fusco they found he had 10,000 dollars and 10,000 euros in cash on him.

According to the indictment, Fusco is a made member of the Genovese Crime Family in New York and participated in extortion, loansharking, operation of illegal gambling businesses, and narcotics trafficking. Furthermore, authorities say he was involved in the gang land executions of Genovese capo, and Springfield mob boss, Adolfo Bruno and mob associate Gary Westerman.

Adolfo Bruno (57) was shot seven times in a parking lot outside the Our Lady of Mount Carmel Society in Springfield’s South End on November 23, 2003. Authorities claim Bruno’s murder was the result of a power play. The hit was plotted by members of his own crew, chief among them Anthony Arillotta, who was labeled as Bruno’s successor. Genovese Acting Boss Arthur Nigro had allegedly given permission for the hit.

The government has two major witnesses against Nigro – and Fusco, who was part of the murder conspiracy. The first is triggerman Frank Roche. Roche faced the death penalty if he was convicted of murder and decided to become a government witness instead. He told investigators that he was paid 10,000 dollars to assassinate Bruno. Roche was told the Springfield mob boss had to be killed because he was a weak leader and a suspected government informant and that the leaders of the Genovese Family in New York had given permission for the hit.

The other witness is Anthony Arillotta, who quickly turned state’s evidence after his arrest in February. Arillotta was the man who set the whole plan in motion by seeking permission for the hit from the bosses in New York. Apparently he did not want to spend the rest of his life behind bars. After becoming a witness, he gave the FBI information about a lengthy list of mob crimes, including the location of the remains of mob associate and drug dealer Gary Westerman. Arillotta fingered Fusco as being a part of the group which plotted Westerman’s murder. With Fusco’s arrest all the main players are now in custody. A trial date has been set for November 1.