And the war on drugs continues. Yesterday, this website reported about the news of an alliance between the Los Zetas drug cartel and the Mara Salvatrucha gang from Guatemala. Today, the Drug Enforcement Administration (DEA) announced that Guatemalan drug lord Horst Walter Overdick Mejia has been hit with serious criminal charges, including the Kingpin Act.

The Kingpin Act, or Foreign Narcotics Kingpin Designation Act, “prohibits U.S. persons from conducting financial or commercial transactions with this individual and freezes any assets the designee may have under U.S. jurisdiction.” In short: The flow of Mejia’s money just came to a standstill. 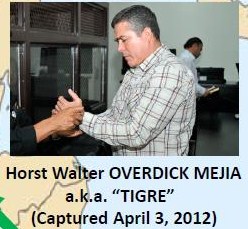 The DEA considers Mejia a critical link in the drug trade between Colombian producers and the violent Mexican drug cartel Los Zetas. Last week, the U.S. Attorney’s Office for the Southern District of New York unsealed an indictment of Mejia for his narcotics trafficking and related firearms activities.

The DEA press release states: “On April 3, Guatemalan authorities arrested Mejia, the head of a major drug trafficking and money laundering organization based in Guatemala. A veteran spice buyer, he used his local contacts and his business acumen to smuggle thousands of kilograms of cocaine to Mexico and on into the United States. It is widely believed that Mejia is responsible for bringing Los Zetas into Guatemala in 2008 in order to eliminate a competing trafficker and who later became their most important ally in Guatemala. He also laundered millions of U.S. dollars in narcotics proceeds generated by both his own organization as well as Los Zetas.”

“These are necessary tools we use to ensure that we put dangerous drug trafficking organizations out of business and ensure they cannot exploit the U.S. financial system,” said DEA Chief of Financial Operations John Arvanitis. “Overdick Mejia was a vital link between Colombian drug producers and Mexican cartels such as Los Zetas. This case is yet another example of the united front that law enforcement and regulators must utilize to ensure that organizations such as this one are put out of business forever.”

“Overdick Mejia’s drug trafficking activities and close ties to the Los Zetas makes him a dangerous and critical figure in the Central American narcotics trade,” said OFAC Director Adam J. Szubin. “By designating Overdick Mejia, OFAC is demonstrating its support for the Guatemalan government in its struggle against the threats and violence posed by these international drug gangs.”

And so the war on drugs rages on. In more countries than ever before.