For over fifty years the Sicilian Mafia has been one of the biggest operators in the international heroin trade. And although their domination of the American market has dwindled, they still import tons of heroin to satisfy American drug addicts. The American Mafia has cultivated a myth in which they deny having anything to do with narcotics. A lot of turncoat mobsters have testified about the "ban-on-drugs rule" within the US mob. However those same turncoats testified how that rule was broken many times and how most mob bosses didn't mind accepting money they knew came from drug deals. Mob boss Joseph Bonanno had always denied his, or his family's, involvement in drug trafficking. Yet many former mobsters and mob historians claim his family was among those most involved in narcotics trafficking.
The forming of a partnership

From October 10 to 14, 1957 Joseph Bonanno chaired an important meeting between Sicilian-American mobsters and Sicilian Mafiosi. The four day meeting was held at the Grand Hotel des Palmes in Palermo, Sicily. In attendence were exiled boss Charles "Lucky" Luciano, Bonanno mobsters Carmine Galante, John Bonventre, Frank Garofalo, Antonio, Giuseppe, and Gaspare Maggadinno from Buffalo, John Priziola from Detroit, and Santo Sorge. These men made up the American delegation. The Sicilian delegation was led by Giuseppe Genco Russo, who was the cousin of Santo Sorge. Other Sicilians in attendence were Salvatore "Little Bird" Greco, Calcedonia Di Pisa, and the La Barbera brothers. The main topic of the meeting was drugs. The Americans saw too many of their men going away to prison for decades on narcotics charges. They wanted the Sicilians to handle the drug trafficking in the United States. The American mobsters and Sicilian Mafiosi would form a partnership. The Sicilians could operate in the US under the protection of the American mob families, and import, and distribute, the drugs. The American bosses would get a cut from these operations.

The Sicilian Mafia families involved were making millions from the drug trade. With so much money at stake things were bound to get out of hand. In February 1962 a heroin shipment financed by the La Barberas and Grecos arrived in New York. The shipment did not contain the expected amount of heroin, someone had pocketed some of the heroin for his own enrichment. The man who oversaw the shipment was Calcedonia Di Pisa, and after other leads turned up nothing, suspicion fell upon him. He was brought before the Sicilian Commission (Cupola) where he was acquitted of having stolen any drugs. The La Barberas disagreed with the decision and on December 26, 1962 Di Pisa was shot dead. Pretty soon a war erupted, which included the use of several car bombs. The war raged on for years and when it ended the second one began not long after. The drug profits were having a serious effect on the trigger happy men of honor. In the middle of that first war a 25 year old Sicilian from Ciminna, a small village south of Palermo, arrived in the United States. It was 1966, Joseph Bonanno had been banned from "the life" by the New York La Cosa Nostra bosses two years earlier, and the Bonanno Crime Family was awaiting an uncertain future. The young Sicilian would help shape the future of the Bonannos, his name is Salvatore Catalano (photo on the left) and he would emerge as a boss in the Sicilian-American heroin pipeline and the Bonanno Crime Family.

When Catalano arrived there already were scores of Sicilian mobsters operating throughout the US, most of them were smuggling heroin. Catalano hung around Knickerbocker Avenue, which became the headquarters of the Bonanno Sicilians. But before that it was the headquarters of Bonanno capo Pietro Licata who operated from the Café del Viale. Licata was an old school mobster, who despised drugdealing, and told all criminals on his turf to stay away from that stuff, or they would pay the price. This wasn't very conveniant for the drugsmuggling Sicilians though. It was a case like so many before and since: kill or be killed. At this point it became clear which group held the power. On November 4, 1976 Licata came out of one of his clubs when a gunman shot him dead. The Sicilians, led by Salvatore Catalano, had taken over Knickerbocker Avenue.

Interestingly the murder of Pietro Licata didn't stop his son John from working with his father's murderers during drug deals. See photo below: 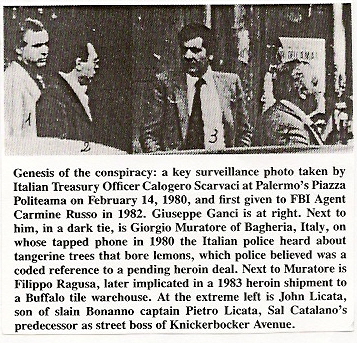 While Catalano led the Bonanno Family's Sicilian faction, he still answered to the bosses back home. It has been a topic of discussion among both mobsters and mob historians: where does the loyalty of the Sicilians lie? The American mobsters never trusted the Sicilians, they labeled them with a derogatory term: zips (many say because the Sicilians talked Sicilian so fast) and always kept a certain distance. They did agree on one thing though, the Sicilians were vicious killers, and not to be taken lightly.
Who's the Boss?

In the late 1970s the Bonanno Crime Family was ruled by Carmine Galante, who was Joseph Bonanno's consigliere during the 1957 Hotel des Palmes meeting. Galante continued Bonanno's practise of bringing in Sicilian Mafiosi to work for him. He felt that the Sicilians were stronger, tougher, and more loyal to him than the Americans. He entrusted them with his life, using them as bodyguards.

At this point Galante was a true powerhouse. One of the most feared mobsters in the US. He had seen it all. He had learned from Bonanno, had led the family's Montreal wing, and had been involved in narcotics from the start. He had also proven to be a stand up guy, coming out of prison after serving twelve years of a twenty year sentence for drug trafficking. Within two days of his release from prison he had his men blow up the bronze doors of deceased mob boss Frank Costello's tomb at Greenwood Cemetery. It was his way of saying: "Fuck you, I'm back. What you gonna do about it?" In the beginning the other bosses let Galante be. He controlled most of the money the Sicilians paid the Americans to be allowed to operate. And as long as Galante equally divided the money among the bosses, they certainly would not cause him any problems. 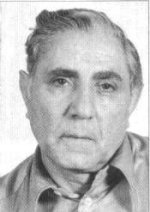 But eventually they grew wary of Galante. His power was growing and growing, and it is alleged he was holding back drug money from the other bosses. Some American mobsters in the Bonanno Crime Family were also unhappy with Galante's leadership. A faction led by imprisoned Bonanno leader Philip "Rusty" Rastelli (photo on the right) started throwing around the idea of eliminating Galante. But could Galante be killed, when he had the backing of his Sicilians? The Sicilians, however, turned out to be a bit disappointed with Galante. Galante was getting ever more greedy, keeping more and more money for himself. The Sicilians were more than happy to help get rid of 'their' boss. 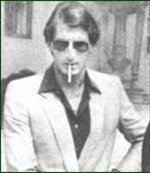 On a hot July afternoon in 1979 Carmine Galante and his two Sicilian bodyguards, Baldassare Amato and Cesare Bonventre (photo left), arrived at Joe and Mary's Italian American restaurant at 205 Knickerbocker. A short while later a blue Mercury stopped in front of the restaurant. Witnesses saw three masked men get out of the car and enter the restaurant, one of the men was carrying a sawed off, double barreled shotgun, another a regular shotgun, while the third was carrying a handgun. Inside the three men caused a bloodbath. Galante was hit in the chest by one shotgun blast, while another shot hit him in the face. He died instantly. The three gunmen fled the scene, leaving behind two more dead, and one wounded. The trusted, and loyal, Sicilian zips had watched and done nothing. They were in on the hit plot, and left the restaurant without any bullet wounds. In the end the Sicilians were most loyal to the mighty dollar.

With Galante out of the way Salvatore Catalano assumed the top position in the Bonanno Family. However his term would be extremely short. After one week as boss he stepped down. The reason was that he had difficulties communicating with the American Bonanno members, making him unfit to rule the family. Besides, Catalano didn't need the boss title and its problems. He needed all his time to run the drugsmuggling operations. Catalano might have climbed to the top of the American Mafia, he still answered to his Sicilian superiors. Chief among those was Giuseppe Bono (photo right). Bono was the head of the Palermo based Bolognetta Family and one of the architects of the famous Pizza Connection heroin pipeline. He was sent to New York by the Cupola to represent the entire Sicilian Mafia. Bono lived in a $250.000 house in the upscale southern Westchester community of Pelham. Money was flowing in, and Bono liked to show it. His wedding was held at St. Patrick's Cathedral, followed by a $64.000 wedding reception at the Grand Pierre Hotel. The reception was attended by over 300 guests, almost all of them were involved in organized crime. They came from all over the world to wish the happy couple a beautiful future. Currently imprisoned Montreal boss Vito Rizzuto was there. So were a host of American Bonanno Family members including a young Vincent Basciano, who would become Acting Boss of the Bonanno Family. And of course Salvatore Catalano and his crew were there. We know this because Giuseppe Bono spent $5.000 on a photographer, who took pictures of the guests. The photos came to the attention of law enforcement who started putting names to all the faces. Authorities had noticed the unknown Sicilian men visiting the mob social clubs, and had started investigating them. The photos would be very helpful.

The pipeline is shut down

Authorities photographed men connected to Catalano and his crew bringing gym bags filled with millions in $5, $10, and $20 dollar bills. It was a scene similar to the one in the movie Scarface with Al Pacino. An amount of $4.9 million was deposited between March and mid April 1982, $8.25 million was deposited at another bank between July 6 and September 27. When so much money is involved you have the law's full attention. US authorities were even working together with Italian authorities on bringing down this huge drug conspiracy.

On the early morning of April 9, 1984 law enforcement carried out raids throughout the United States. Four-hundred federal agents and police officers arrested twenty-two suspects, seized handguns, rifles, shotguns, thousands of rounds of ammunition and hundreds of thousands of dollars in cash. Salvatore Catalano was among the arrested. The trial went down in history as the Pizza Connection trial. Simply because pizza parlors were used to distribute the drugs and launder the money. Authorities said over $1.5 billion worth of heroin was imported. The money had been moved through wire transfers, private airplanes, and using men who would travel the world with a suitcase filled with drug dollars. The trial lasted a stunning seventeen months and cost the American taxpayer more than $50 million. But in the end the government came out the winner. The so called bosses of the Pizza Connection were all found guilty, including Catalano who was sentenced to 45 years in prison.

There"s a pizzeria in Hoboken Benny Todino's on Washington st that was involved in the Pizza connection If I'm not mistaken? I remember everyone talking about it. Great story!