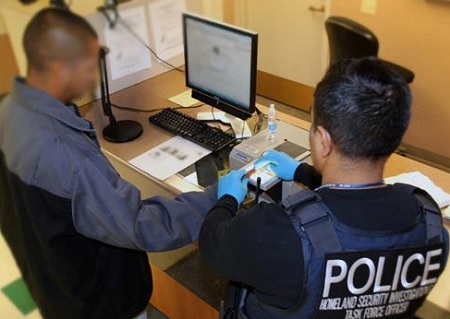 Most of the individuals arrested during Project Shadowfire were U.S. citizens, but 239 foreign nationals from 13 countries in Central America, Asia, Europe and the Caribbean were also arrested. Of the 1,133 arrests, 915 were gang members and associates, 1,001 were charged with criminal offenses and 132 were arrested administratively for immigration violations.

The majority of arrestees were affiliated with gangs like MS-13, Sureños, Norteños, Bloods and several prison-based gangs. Enforcement actions occurred around the country, with the greatest activity taking place in the Los Angeles, San Juan, Atlanta, San Francisco, Houston, and El Paso areas.

“This operation is the latest example of ICE’s ongoing efforts, begun more than a decade ago under Operation Community Shield, to target violent gang members and their associates, to eradicate the violence they inflict upon our communities and to stop the cash flow to transnational organized crime groups operating overseas,” said ICE Director Sarah R. Saldaña.

Operation Community Shield is a global initiative, started by ICE in 2005, in which HSI collaborates with federal, state and local law enforcement partners to combat the growth and proliferation of transnational criminal street gangs, prison gangs and outlaw motorcycle gangs in the United States and abroad. Through its domestic and international Operation Community Shield task forces, HSI leverages its worldwide presence and expansive statutory and civil enforcement authorities to mitigate the threats posted by these global networks, often through the tracing and seizing of cash, weapons and other illicit proceeds.

Since the inception of Operation Community Shield in February 2005, HSI special agents, working in conjunction with federal, state and local law enforcement agencies, have made more than 40,000 gang-related arrests and seized more than 8,000 firearms.