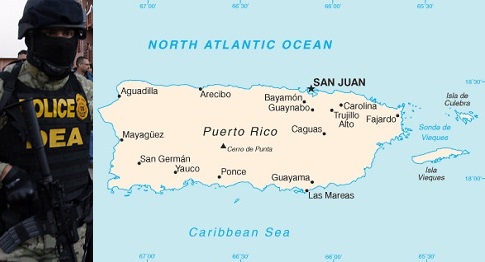 Lucrative, violent, and very deadly. That’s how you can describe La Organizacion de Narcotraficantes Unidos, a drug organization from Puerto Rico that trafficked cocaine to the Bronx in New York and swiftly executed any rival it deemed necessary to protect its business.

Eight members and associates of La Organizacion de Narcotraficantes Unidos were named yesterday in an unsealed indictment charging them with six murders and multiple counts of racketeering, drug trafficking, and firearms offenses.

All defendants are charged with murder. Authorities allege the group murdered six people in Puerto Rico to protect its narcotics enterprise, stating, “Members and associates of La Organizacion de Narcotraficantes Unidos engaged in acts of violence, including murder, to protect and expand the enterprise’s criminal operations and in connection with rivalries with other criminal organizations. In particular, members of the enterprise shot and killed suspected rival drug trafficking members.”

This was a fact that disgusted Joon H. Kim, the Acting United States Attorney for the Southern District of New York, as well. “Members and associates of a violent drug trafficking organization, La Organizacion de Narcotraficantes Unidos, allegedly committed six ruthless murders to further a drug trade that funneled massive quantities of cocaine from Puerto Rico to New York,” Kim told the media. “Frighteningly, one of those six murders allegedly was committed by an active and a former member of the Puerto Rico Police Department. As alleged, when police officers, sworn to protect the citizens they serve, instead kill to protect drug trafficking profits, that tears at the very fabric of civilized society.  Such alleged lawlessness simply cannot be left unchecked.”

While active duty police officers were murdering on their behalf, the group made a killing dealing drugs as well. They smuggled cocaine to New York where it was distributed at various spots, including out of a daycare center in the Bronx. The Bronx has a large community of immigrants from Puerto Rico.

“A 2013 investigation grew legs into something much more dangerous than a local drug distribution organization operating out of a daycare center in the Bronx,” James J. Hunt, the Special Agent in Charge of the New York Field Division of the Drug Enforcement Administration (DEA), said.  “It led investigators to identifying the organization’s alleged source of supply comprising corrupt cops and violent thugs who were arrested today in Puerto Rico.”

If convicted, all defendants face the death penalty or life in prison.