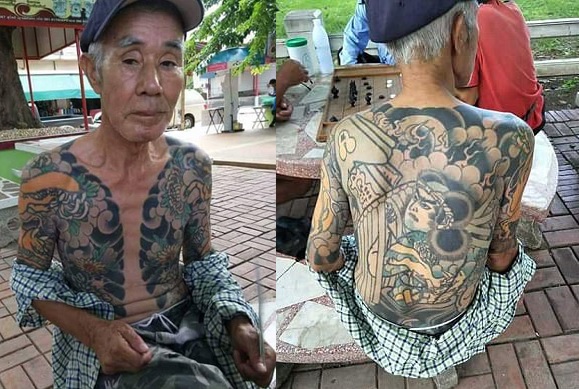 Sure. Shigeharu Shirai has made mistakes. Who hasn’t? But he’s learned from them. He’s paid for them. In his line of business mistakes cost. Sometimes even a life. To keep that in mind, he’s had to cut off his little finger. Just so he remembers that mistakes cost dearly and have no place among the powerful members of the Yakuza.

His deformed hand branded him as a mobster for the rest of his life. In Japan, people immediately know what caused the loss of that finger. The mistake set his criminal career in stone. No turning back.

As he moved up in the world of the Yakuza, Japan’s Mafia, he showed he had matured, that he was missing a finger but had gained knowledge. He also gained elaborate tattoos all over his body – another staple of the Yakuza. The irezumi tats were a sign of his important status. By the 2000s, Shirai had become a leader of the Kodo-kai, an affiliate gang of the Yamaguchi-gumi, Japan’s largest Yakuza clan.

Leading the Kodo-kai proved troubling. There were some squabbles that resulted in a split within the group and subsequent deadly violence. The boss of the rival faction was shot to death in the village of Takasucho in Tsu City in July of 2003. Police quickly found that Shirai had taken out the rival leader within his own clan and began arresting several of the group’s members – seven of them were convicted and sentenced to between 12 and 17 years in prison.

The increased attention from authorities caused Shirai to break a sweat. In 2005, he decided it best to pack up his things and sneak to a foreign country. Japanese investigators were confronted with a Yakuza boss who vanished into thin air to evade facing punishment for murdering his gangland rival.

When the clock struck 12 and people wished their loved ones a happy 2018, Shirai celebrated his thirteenth year as a fugitive. He had settled in the Lopburi Province, smackdown in the middle of Thailand, where he married a Thai woman. Now in his early 70s,, he was simply living out the rest of his life.

By all accounts, he kept a low profile. He didn’t have much money to spent and is alleged to have slept in parks after he no longer had funds to stay in hotels. A couple of times a year, a Japanese man came and gave him some cash. How much is unknown. As is the reason.

Though the easy guess is the man did so because of Shirai’s position as a Yakuza boss. He might be a fugitive. He might be retired. But he still has the tattoos. He still misses that finger. He still devoted his life to the clan. He still is a boss.

In Thailand, Shirai had begun to draw some attention to himself. His tattoos amazed one man who decided to take a photo and share it on his Facebook account. At 74 years of age, Shirai probably didn’t realize the mistake he had just made. Within days the image was shared thousands of times and Japanese police contacted their Thai colleagues.

Last Wednesday, January 10, Shirai was doing some shopping in Lopburi when he was swarmed by a Thai SWAT team and placed under arrest. The jig was up.

Shirai admitted that he was the leader of the Kodo-kai, a Thai police spokesman stated after the arrest. Of course, being a member - or even a boss - of the Yakuza is not a crime. Murder, however, is. On that note, “The suspect has not confessed to murder but has admitted that the victim used to bully him,” the spokesman added.

His retirement in Thailand may have come to an abrupt end, but men in Shirai’s world know that there is no such thing as retirement. All it takes is one mistake. And then they pull you back in.