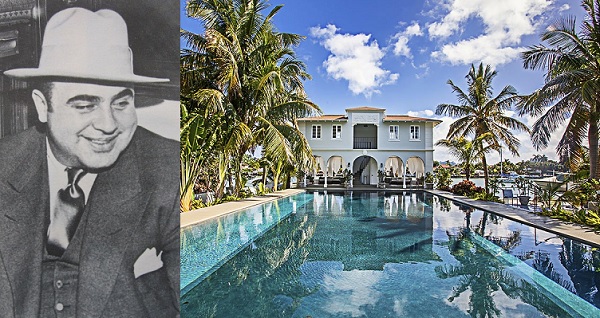 Don’t you just wish you could get away from all the madness and enjoy some peace and quiet? Al Capone also had that wish, so he got himself a luxurious waterfront villa in Miami Beach. At 93 Palm Drive, he was far removed from the violent gang wars in the Chicago underworld. Now, his place of refuge could be all yours!

Located on a 30-thousand square foot lot, the mansion is hidden away from the public behind century-old palm trees and perfectly manicured greens. It was a perfect fit for the infamous Chicago mob boss.

He bought the property for $40,000 in 1928 from Miami mayor John Lummus, who was also a realtor. To keep up appearances, Lummus condemned Capone and the mob in public and had Parker Henderson Jr. (himself the son of a former Miami mayor) sign his name on the official documents.

“Capone kept a low profile when in Miami,” Gus Russo writes in The Outfit: The Role of Chicago’s Underworld in the Shaping of Modern America. “Save for his temperamental, but futile, appearances on the tennis courts and golfing greens, where he was seen hurling rackets and clubs in hacker’s frustration.”

After his release from prison on November 16, 1939, Capone was a shadow of his former self. Suffering from syphilis, his health quickly deteriorated. He spent his last years at his Miami Beach villa, where he died on January 25, 1949, surrounded by his family.

If you’re interested in owning this historic and, frankly, epic home, then you will have to pay up a lot more than what Capone paid back in 1928. Realtor Nelson Gonzalez currently has the listing and is putting it up for a whopping $14.9 million dollars.

What that gets you? Well, besides the spacious residences on the property, it gets you one of the largest pools in Miami, Gonzalez told CBS Miami. “It is 60-feet long and 30-feet wide,” the realtor says. “He tried to compete with The Venetian pool when they built it in 1920’s.”

Interested in owning this pricey piece of Mafia history? Then check out www.nelsongonzalez.com

Apparently, interest in the mob mansion wasn't as anticipated. The realtor has slashed the asking price of $15 million with $1.5 million, bringing the total to $13.5 million. Not exactly a bargain, but then again, we are talking about a lavish villa once owned by the most infamous Mafia boss in the world.