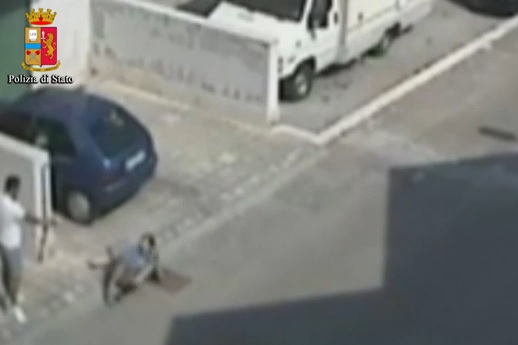 Since it’s Friday the 13th today, we at Gangsters Inc. decided to lift your spirit with a story (and video) of a vicious Mafia hitman and his extremely lucky victim.

During a wild chase in broad daylight in the Italian town of Foggia, victim Michele Di Bari (31) dropped to the ground as he was hit in the leg by a bullet fired by 24-year-old gangster Michele Morelli.

Besides hitting Di Bari’s leg, Morelli’s bullets also wrecked a couple of innocent cars near the victim. With Di Bari on the ground, he could finally finish the job up close and personal. Morelli aimed his gun at Di Bari’s head and looked him straight in the eye as he pulled the trigger. And pulled the trigger again.

But nothing happened. He was out of bullets. The hectic chase, the aiming, the sprinting, the adrenaline…the sun perhaps, whatever was the cause: He forgot to count his bullets (or save his ammo).

Realizing that smashing his victim’s head with the gun would be even more difficult than hitting a moving target while attempting to break Usain Bolt’s Olympic sprinting record, Morelli took off. A few days later, Italian police placed him under arrest and charged him with attempted murder and illegal possession of a firearm.

Watch the video below: