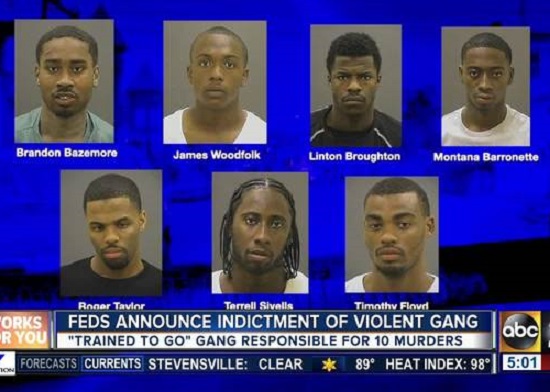 Eight men were convicted by a federal jury on Wednesday for their crimes committed for the West Baltimore gang known as Trained To Go (TTG). These included nine murders, drug trafficking, and witness intimidation, and dealing heroin, marijuana, and cocaine. Several of the defendants were also convicted of related drug and firearms charges.

“Federal, state and local law enforcement joined together to target the leaders and key members of one of the most violent gangs operating in Baltimore City,” said U.S. Attorney Robert K. Hur. “Today’s convictions prove our continuing commitment to removing armed, violent criminals from our neighborhoods and bringing them to justice in the federal system, which has no parole—ever.”

Trained To Go (TTG) is a criminal organization which operated in the Sandtown neighborhood of West Baltimore. Its members sold heroin, cocaine, and marijuana, and used violence and murder to defend their exclusive right to control who sold narcotics in their territory.

At trial, evidence proved that between May 20, 2010 and May 25, 2016, TTG gangsters committed acts of violence, including nine murders, shootings, armed robbery, and witness intimidation. The violent acts were intended to further the gang’s activities, protect the gang’s drug territory, and maintain and increase a member’s position within the organization. Much of this deadly violence was committed by 23-year-old Montana Barronette (right), who was singled out by authorities as the number one trigger-puller in the city of Baltimore.

Bazemore and the government have agreed that if the court accepts the plea, Bazemore will be sentenced to 25 years in federal prison at his sentencing on November 13, 2018. Co-defendants Hisaun Chatman (31) and James Woodfolk (20) pleaded guilty to drug conspiracy and were each sentenced to five years in prison, to be served concurrent to the state sentence each is currently serving.

Co-defendant Roger Taylor is still a fugitive, and the charges against him are pending.  Anyone who may have information on the whereabouts of Roger Taylor is asked to contact the FBI-Baltimore Field office at (410) 265-8080.

The defendants convicted on Wednesday are: